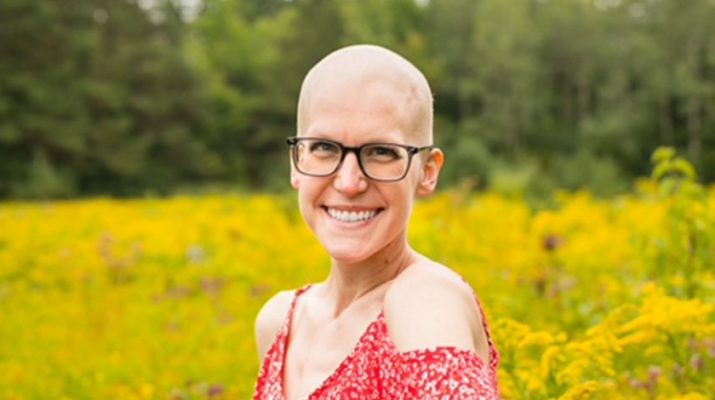 ‘If you have the option for a clinical trial, take advantage of it,’ says patient

Brianna Procopio was only 30 years old when the bad news came: Breast cancer. She had multiple tumors in her left breast, some of which were more than two centimeters in diameter. An aggressive treatment plan was necessary because the disease had progressed to the second stage.

Procopio was juggling her career as a medical insurance specialist with raising two young children.  Mapping out her future at that point was a daunting task. Physician Jeffrey Kirshner, the lead researcher Hematology/Oncology Associates of Central New York, informed her that she was eligible for an ongoing clinical trial for patients like herself that had the HER-2 gene.

Procopio previously elected to get a genetic test because her grandmother had breast cancer. She said the test came back negative. Her-2, however, is not an inherited gene. Rather, it’s an abnormal protein that is developed.  Kirshner noted that, nationwide, the HER-2 gene has been linked to 25 percent of breast cancer cases.

“Years ago, it was one size fits all,” Kirshner said in a recent interview. “Now, we try to be more specific to the patient’s needs.”

Procopio was eager to sign on for the clinical trial. A friend of hers that battled breast cancer endured many chemotherapy sessions and complained about seemingly constant nausea and fatigue.

“She said one of the chemo types is called ‘red devil’ because it’s so intense,” Procopio said.

According to the Mayo Clinic web site, chemotherapy defined as a drug treatment that uses powerful drugs/chemicals to kill fast-growing cells in the body. It is specific to cancer treatment because cancer cells grow and multiply much more quickly than most cells on the body.

Paclitaxel and/or docetaxel are among the drugs commonly used in chemotherapy for breast cancer patients.  These medications prevent cancer cells from dividing, and eventually kills those cells. According to the Chemocare web site, chemotherapy is most effective at killing those cells that are rapidly diving. Unfortunately, chemotherapy does not know the difference between the cancerous cells and the normal cells. Side effects, including low blood counts, mouth sores, nausea, diarrhea and hair loss, occur when the normal cells are damaged and before those normal cells grow back and become healthy again.

By contrast, the pertuzumab and trastuzumab antibodies used in this clinical trial  work by attaching themselves to the HER2 receptors in the surface of the breast cancer cells and blocking them from receiving growth signals, according to the www.breastcancer.org web site. The two different antibodies actually target two difference areas on those receptors. This is considered immune targeted therapy.  In addition, pertuzumab also fights breast cancer by alerting the immune system to destroy cancer cells onto which it is attached.

The Food and Drug Administration, which last year approved the fixed dose combination of these two antibodies for breast cancer treatment, reported that less than 30 percent of patients noted some side effects from pertuzumab and trastuzumab, but the intensity of those side effects was far  less than what patients experience after chemotherapy.

“The more you get, the more likelihood of bone marrow problems, leukemia….” he said.

Procopio was diagnosed with breast cancer in May 2020.  She elected to get the lower doses of chemotherapy for 12 weeks instead of the higher doses for three weeks. She received the two antibodies once every three weeks for a year. As for the surgery, Procopio chose a double mastectomy instead of just having the right breast removed.

She has been in remission for over a year now, and has follow-up appointments once every three months. Procopio said she did lose her hair following chemotherapy, and at times she felt tired but was still able to keep working and stay on top of her tasks at home.

“The nausea was not too bad,” she said. “At times there was this different type of exhaustion, where I was just too tired to play with my kids. My energy levels have come back. But in many ways I feel like I got off easy. The whole thing is an emotional roller coaster. Even when I was done with everything, you feel this big relief, but you still feel a little uneasy, like it may not be over yet.”

“But yes,” she added, “if you have the option for a clinical trial, take advantage of it.”

The study has enrolled 435 patients nationwide.  Its goal is to review the results on a total of 1,250 patients.  If this treatment is proven effective, the standard of care for patients with this type of breast cancer could avoid the short- and long-terms adverse effects of multiple chemotherapy.

Locally, Kirshner said all of the patients he has worked with in this clinical trial were in remission after surgery. The treatment after surgery is preventative. Half of the parents had no cancer in the surgical specimen, while the other half had some cancer that was removed surgically.

There is a follow-up clinical trial in the cases where the patients in EA1181 did not fully respond to the treatment. Eligible patients for this study will receive 14 doses of a new drug, TDM-1, instead of continued doses of the two antibodies. Two of the 40 patients enrolled nationwide are from Syracuse.

“We are focused on the long-term effects,” Kirshner said. “Advancements in treating breast cancer are coming very quickly.”