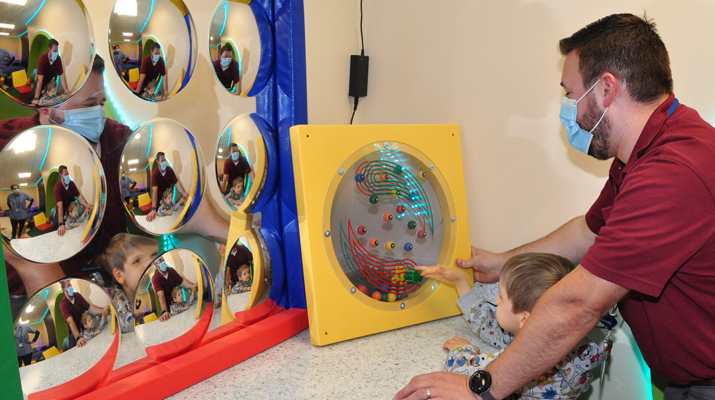 During the past year, the Upstate Golisano Children’s Hospital has seen a 17% increase in the number of autism patient appointments, a reflection of a nationwide trend.

In 2021, the Centers for Disease Control estimated that one in 44 children will be diagnosed with an autism spectrum disorder by the age of 8. That represents the highest rate since the federal agency began tracking cases in 2000.

The increasing number of cases is the result of “more awareness of autism spectrum disorder on two fronts,” said Henry Roane, Ph.D., division chief of the Center for Development, Behavior and Genetics at Upstate.

As a society, the discussions surrounding autism spectrum disorder have become more public, helping to reduce the stigma of seeking care and treatment, he said. In fact, “we’ve even had calls from adults who believe they may have gone undiagnosed as a child,” said Roane, who also serves as executive director of the Golisano Center for Special Needs.

Autism, or autism spectrum disorder, refers to a broad range of conditions characterized by challenges with social skills, repetitive behaviors, speech and nonverbal communication, according to the Autism Speaks organization.

“We know that there is not one autism but many subtypes, and each person with autism can have unique strengths and challenges,” the nonprofit agency states. Autism Speaks is both an autism advocacy group and the largest autism research organization in the United States.

“People have become more aware of autism spectrum disorder” as a result of an increasing number of movies and television shows focusing on children with autism and their families, Roane said.

While the increasing number of autistic children’s portrayals is helping to create a better understanding of the condition, “sometimes those children with the most difficult behaviors are still not as readily accepted,” Roane said. Children with aggressive behavior, for example, are not typically the ones portrayed in the media, he noted.

“That type of awareness is really important for the population, and definitely helps with inclusion and acceptance,” he said. “But there are many children who have severe impairments, including cognitive and language, who also have autism. The media portrayals of these children are lacking.”

Parents of children with more challenging autism disorders, such as those who harm themselves or are not toilet trained “may feel left out of the discussion. That’s not their child on the television,” Roane said.

To help cope, parents of these children have often chosen to form their own support groups to help raise awareness of the “more severely impaired individuals with autism,” he said.
On a local level, the establishment of the Golisano Center for Special Needs in 2021 has also been a major factor contributing to the increase in autism patient appointments, Roane said.

The center provides comprehensive, coordinated and scientifically based medical and behavioral care for children and adolescents with many types of intellectual and developmental disabilities, according to Upstate Medical University. “The center acts as the umbrella, creating a framework to increase collaboration resulting in better patient care,” according to Upstate. “It helps to centralize programs and services available to this population.”

As a result of establishing the Center for Special Needs, which was supported through a major fund-raising campaign by the Upstate Foundation, awareness has increased about the many different treatments and services available to autistic children and their families throughout Central New York, Roane said. It has also resulted in additional referrals from pediatricians in surrounding counties, particularly rural areas.

“The research is clear – the earlier you can start treatment for core symptoms, the better the outcome,” said Roane. “Two years of age is where you want to be for early intervention.”

Advances in medical research have allowed health care professionals to identify children with autism spectrum disorder at an even earlier age. “Now researchers are noticing low muscle control in infancy, how they move their eyes and other characteristics” that could indicate an autism case, he said. There is also experimental saliva testing being conducted as a way to help with diagnosis at an early age, he said.

Roane, a professor of pediatrics, is one of four experts who received grant funding from Autism Speaks to help improve the care provided to those with autism who experience severe behavioral challenges.

The grant funding is designed to collect and compile information nationwide about the current practices in identifying and handling challenging behavior from a wide variety of sources, including pediatric offices and specialized clinics.

It was also recently announced that Upstate Golisano Children’s Hospital would join the Autism Care Network, a premier network focusing on improving the quality of health care children with autism and their families.

Upstate will be joining 24 other hospitals nationwide in the network, which is supported by Autism Speaks, Roane said.

The partnership will be a valuable resource in helping to continually improve clinical care and quality of life for children with autism because it will allow health care professionals from throughout the country to share information about “what’s working in their clinics,” he said. “It will help to make our program even better,” Roane said.