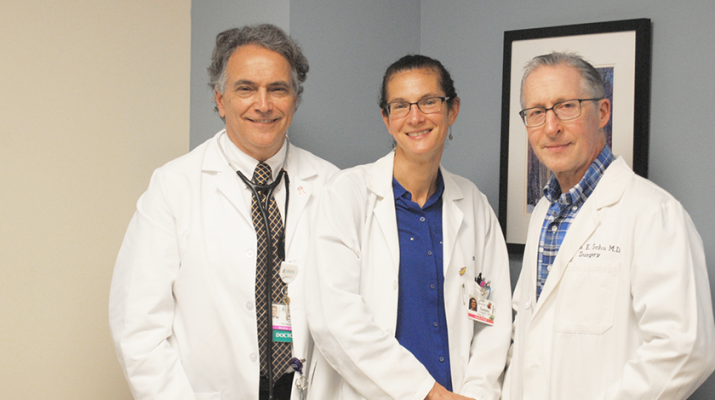 Breast Care Center is a virtual program that gathers physicians from different practices in CNY. The goal?  To offer better cancer care

When patients enter a breast cancer care center, most often they expect to find all the doctors and treatments in one structure. And one certainly doesn’t envision a program in which the providers might be considered competitors.

But the Breast Care Program, which began about five years ago, is just that. It is, as one doctor called it, a system without walls, and is comprised of some entities which might be looked upon as rivals.

This program is virtual, as opposed to vertical, according to physician William Schu of Central New York Surgical Physicians, PC, who developed the concept for the center with another physician, John Gullo, and serves as its medical director.

“Most breast centers are vertical,” Schu explained. “You go to a building. Everything’s in the same building.”

In proposing his vision, he said, “We could set up a system that’s virtual, that’s connective, that has all the components, but it’s going to be spread out over the footprint of Syracuse.”

To accomplish this goal, he said, the components of breast care throughout the community would have to work together — hospitals, surgeons, radiologists, pathologists, oncologists and radiation oncologists.

It has full accreditation by the National Accreditation Program for Breast Centers, a program administered by the American College of Surgeons.

“In essence, we’re competitors, but in reality we’re colleagues in the system of care,” Schu noted. The point is they all wanted to elevate the standard of care and the only way to do that, he explained, was to bring in other systems.

Physicians Schu, James Sartori, and Tammy Congelli see the partnership as beneficial to both the patient and the provider. All three are from CNY Surgical Physicians, and Crouse is the hospital with which the group is affiliated.

“We all agreed to adhere to these high principles, these high standards and cohabit this partnership,” he continued. “As long as we have the components in place and meet regularly to discuss our cases and so on, we’re doing everything we can and should be doing for breast care. And that’s what it comes down to.”

The partners meet and discuss as many cases as possible, Schu explained.

“When we do meet to discuss them, there’s a lot of back and forth. There are discussions, maybe disagreements, agreements and at the end of the day we come up with a plan that’ll be the best plan for that patient,” he said.

Sartori sees the partnership as a centralization of care.

“You can’t practice in a bubble anymore,” he said. “This is a nice opportunity for a patient to feel that they’re getting state-of-the-art care, and if they have a difficult case, that the community’s contributing for this.”

Physician Congelli calls it “a system without walls.”

“When patients walk in here they can honestly feel like we’re going to take care of them. I basically say to them, ‘we’ll drive the bus,’” she said. “This is an overwhelming process. It’s very emotional for women. I think a lot of times, they’re scared to death. We have this large group of people that are all here for you and we’re going to help you.”