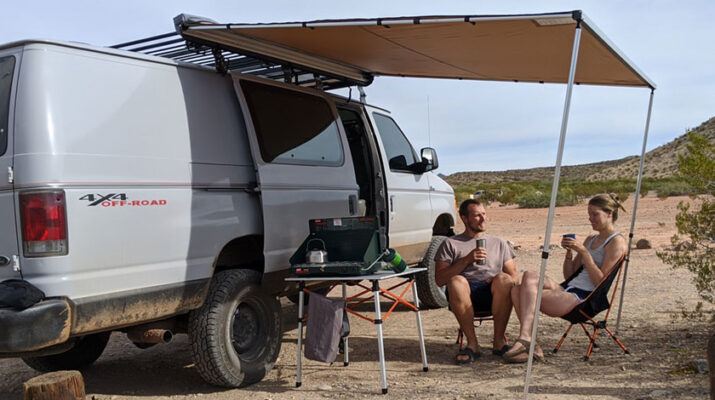 Couple traded their 9 to 5 jobs for a year of van-fueled travel and adventure, dramatically boosting their health in the process.

When the time came for New Year’s resolutions, you vowed to eat healthier, get more exercise and improve your overall health. And then, a few weeks into the new year, you gave up.

If you’re looking for help with health and fitness goals, consider the van life.

Justin and Savaria Crego traded their 9 to 5 jobs for a year of van-fueled travel and adventure, dramatically boosting their health in the process.

The couple had been married about a year and was happy together, but their day jobs and being tethered to a cramped apartment ground them down. They wanted to hike the national parks, visit Canada and experience the rugged beauty of the Pacific Northwest.

Instead, they found themselves living for the weekend. They took hikes, explored parks and went to concerts. There were wine tastings with friends and semiannual camping trips. Savaria devoted her time to crafts and becoming a certified yoga instructor. Justin belonged to a CrossFit gym. But they realized they needed a change.

Before embarking on their adventure, they had an apartment in Liverpool.

The van life movement has soared in popularity with millennials. On Instagram, “van lifers” share a steady stream of breathtaking landscapes and selfies; nearly 10 million posts are tagged with the hashtags #vanlife and #vanlifediaries.

Living in a customized van appealed to Justin and Savaria. They crunched the numbers and realized they could afford to buy a used van, fix it up and spend at least a year traveling the country.

“I realized we could actually do it,” Savaria says. “That kind of made it real for us.”

In August 2019, after months of work, they quit their jobs, got rid of their apartment and donated or stored their belongings before hitting the road.

The couple had been health-conscious while living in Central New York. They followed a paleo diet and learned to eat for nutrition rather than just eating for the sake of eating. But they soon found their nomadic lifestyle took things a step further.

Their secondhand 12-volt cooler, which they eventually replaced, didn’t work particularly well, which limited the amount of perishable foods they could have. That meant they all but stopped eating meat and cut back on dairy. They got their protein from hemp seeds, quinoa and beans. They traded snacking on chips for munching on cashews, raisins and pickles. Chia seeds also worked their way into their repertoire of meals.

There’s no normal day for a van lifer, but Savaria and Justin tried to develop a routine, especially with food. If they stayed at a campsite, they usually took their time getting ready for the day. Morning coffee in folding camp chairs under the van’s awning offered a front row seat to a panoramic landscape. Then they’d usually turn to a trusted breakfast staple, like oatmeal or cereal before hitting the road; occasionally they’d indulge with Pop-Tarts.

With only a Coleman propane stove to cook on, they tried to keep things easy and simple, typically making salads, veggie wraps or cooking one-pan meals. The idea was to include as much fresh produce and fruit as possible.

“We were eating for nutrition, not just to get full,” Justin says. “We wanted to get our vitamins and minerals.”

They frequently used potatoes, peppers, onions and carrots. Sometimes they added an extra ingredient, like eggs or salsa. Hot sauce was plentiful. With a few changes, they were able to make many variations of the same handful of meals.

Despite a healthier diet, the couple’s rickety cooler limited how long they could be off the grid.

“We figured out that we could only last three days without going to a store,” Justin says.

The couple did have a few Meal Ready to Eat (MREs) tucked away for emergencies (they never used them) and there was enough canned soup, pasta and other dry food in their tiny mobile pantry to limp along a few extra days if necessary. But their diets dictated a lot of fresh food. Once they replaced their cooler, they could go five days without a grocery store.

They prepared the majority of their meals, only occasionally stopping to splurge on Mexican or Chinese. They avoided fast food altogether.

Justin and Savaria noticed differences soon after they hit the road. They were consuming fewer calories than they ate back home and were more active.

“I think our diets have improved a lot,” Savaria says.

Justin, who is 6 feet 5 inches tall and once weighed 320 pounds, had slimmed down to roughly 260 pounds in 2014 when he joined a CrossFit gym. He managed to lose another 10 to 20 pounds, but says he wasn’t satisfied.

“I got to a point where I plateaued,” he says. “Working out I wouldn’t really lose weight.”

On the road, however, with the challenges of apartment living and a typical American diet behind them, Justin noticed he was running a caloric deficit.

“The first three months I was constantly hungry, but there was always something to distract me from the hunger,” he says.

Justin hadn’t set out to lose weight during their adventure and at first he didn’t see a significant change. He did notice that he lost some muscle mass without a gym for regular strength training, although he did try to keep up by doing exercises using his body weight or jugs of water.

Over the course of a year, however, Justin says he lost roughly 30 pounds and two pants sizes.

While their diet improved on the road, their activity level also skyrocketed.

If they were driving somewhere new, they would leave as soon as possible. Depending on the day, they might go for a hike or if they day at a new campsite, take a few hours to pick up the trash and litter that was usually left behind by previous campers. Throughout the day, they were continuously munching on healthy snacks like nuts and raisins. Justin continued to squeeze in strength training and Savaria practiced yoga often.

“I think our main thing was we’d go to destinations to hike,” Savaria says. “Hiking was definitely our primary source of exercise.”

The couple had done a fair amount of hiking on flat terrain around Syracuse, such as Onondaga Lake, but became bored repeating many of the same trails.

Throughout their journey, which lasted a little over a year, the couple visited 15 states and three Canadian provinces. They hiked at almost every destination. There were obvious highlights, such as the Grand Canyon. At Sequoia National Park Justin marveled at the largest trees on earth. In White Sands National Park, they climbed the glistening white dunes that create the world’s largest gypsum dune field.

Hiking multiple times a week quickly built up their endurance. Their hikes often led them to a new landscape so beautiful it could have been clipped out of a National Geographic magazine.

Throughout their adventure the Cregos had no alarm clock, no jobs, no set schedule. Yet they still found themselves racing against time. The couple had saved enough money to spend about a year on the road and wanted to see as much as possible.

Instead of taking their time and enjoying themselves, Savaria says it was hard to break the mentality that they had to keep moving to see and do as much as possible. They rarely stayed in one spot for more than a day.

“We were just constantly moving,” she says. “We’d climb a mountain and then say ‘What’s next?’”

It may have contributed to their physical fitness, but they wanted to slow down a bit. They got their chance in spring 2020 when the pandemic made travel increasingly difficult. They spent three months with relatives. When they left, they took their time and enjoyed themselves more.

In addition to being more aware of their physical health, the couple also took steps to improve their mental health.

As they prepared to begin their adventure, Justin says it was apparent from social media that one of the selling points of van life was becoming mentally centered and living a sort of Zen lifestyle. He was excited for their journey, but skeptical about much of the hype.

“I still had some expectation of being more mindful and being more present,” Justin says. “It just didn’t happen.”

To be sure, the couple enjoyed the freedom and exploring new places. But stresses and issues in life don’t disappear when you trade a 9 to 5 job for life on the road, Justin says.

“You can have great parents and grow up in a great environment and still have issues,” he says.

They have since given up their nomadic lifestyle and in late 2020 moved into an apartment in Baker, a small town in remote eastern Oregon.

Justin has a job as a technology consultant with the local school district and Savaria is pursuing a home crafting business. They’re in the process of buying a house there.

The couple says they enjoy the fact that bathrooms and hot showers are no longer luxuries, and that heat is only a flick of the thermostat away. They also have a backyard for their dog Zuko.

“I don’t mind the structure and getting back into a routine where we don’t have to worry about where we lay our head every night,” Justin says.

Transitioning to apartment life has presented some hurdles too. Savaria is baking a lot more and the couple is much more likely now to cook something prepackaged than making it from scratch like they did on the road. The holidays were a challenge too. And even with access to a gym, it can be tough to be as active as they once were.

“We still binge on TV shows and get into routines of eating dinner, watching TV and then desserts,” Justin says.

Photo: Justin and Savaria Crego of Liverpool quit their jobs, bought a used van, fixed it up and spent at least a year traveling the country. They visited 15 states and three Canadian provinces — and hiked at almost every destination.