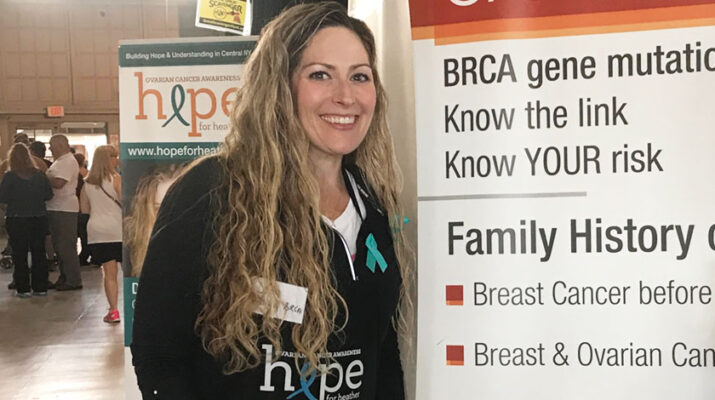 In addition to predicting risk of cancer, genes can also make a difference in treating cancer

Many factors play into why cancer develops, both known and unknown.

For some people, family history plays a role, yet only 5% to 10% of cancers are caused by inherited gene mutations, according to the American Cancer Society. Other health factors, such as obesity, diet, exercise and stress management make a difference as do environmental influences, including radiation, certain chemicals, tobacco use and smog exposure.

The American Cancer Society recommends exploring genetic testing for people who have a strong family history of certain types of cancer, those already diagnosed with cancer (especially if it appears an inherited mutation could have caused it), and people whose family members have a known inherited gene mutation.

A lack of a gene mutation does not meant cancer cannot occur.

“We often talk with women on knowing their history and knowing their genetics, but a family history doesn’t preclude you from having breast cancer,” said Andrea Moran, executive director of the Upstate New York affiliate of Susan G. Komen Breast Cancer Foundation. “They may say, ‘No one ever had it in my family history’ or ‘It doesn’t show up in my genetic testing,’ but that doesn’t mean you should take your eye off regular screening, at home breast care and mammograms.”

She encourages people to “know your normal” when it comes to their own bodies.

Whether it is the breasts or other areas of the body, “if you see something abnormal, that should prompt a call to a provider,” Moran said.

For those who undergo genetic testing, it is important to understand how a mutated cancer risk gene, such as BRCA1, BRCA2 or Chek2 for breast cancer, can raise risk for other areas of the body.

The BRCA1 or 2 genes place women at higher risk for reproductive cancers, for example. About 44% of females with a BRCA1 and 17% of those with BRCA2 mutation will have ovarian cancer by age 80, according to www.cancercenter.com.

All in the family

Jill Smith of Cicero didn’t want to join those statistics.

Her mother was diagnosed with breast cancer at age 28 in one breast and 32 in the other. By the time Smith was 23, her mother had died at age 47. Smith’s aunt was also diagnosed at ages 30 and 49.

Smith knew too well the devastation of breast cancer. Once she became aware of genetic testing in 2006, she asked about it; however, her OB-GYN said that family history had nothing to do with it. Finally, five years later, she had genetic testing. The BRCA 1 gene mutation was detected, which increased her risk of ovarian and breast cancer.

She chose prophylactic bilateral mastectomy 12 weeks after having her fourth child, since “I felt close to the point where I knew I’d have cancer,” she said.

Though a difficult decision to make, she feels confident it was the right choice.

“I would rather have surgery than chemotherapy and radiation since I had four kids,” she said. “I watched my mom go through it. I need to be around for my kids. My mom never got to meet my kids. That was the driving force. I knew that I was going to have the mutation because of my family history and I feel really fortunate I found that out. I had the chance to stay a step ahead.”

Smith is a member and co-founder of Positively BRCA Support Group, started from grassroots efforts. The organization supports people touched by breast cancer and promotes information and awareness in the community.

She encourages people with cancer gene mutations — including men — to remain vigilant about their health and to ask their providers about other screenings and preemptive measures they may need.

Most insurance companies cover genetic testing for people with enough risk factors. The testing can reveal if they carry genes that raise their lifetime risk of cancer or if wait-and-see is a reasonable approach.

People with genetic predisposition to certain types of cancer must also determine how preemptive surgery would affect other areas of life. A young adult who had not yet had children may want to delay surgery that would affect fertility, for example, compared with someone who has already had a family.

Instead of paying for frequent rounds of imagery, insurance companies are usually more ready to pay for preemptive surgery and reconstruction for patients with high risk cancer gene mutations.

In addition to predicting risk of cancer, genes can also make a difference in treating cancer.

Physician Albert Rizzo, chief medical officer with the American Lung Association, said that in the past five to 10 years, “there are at least 20 new drugs targeting mutations.”

The treatment is most effective if begun with an early diagnosis.

“It’s probably more relevant in lung cancer because that’s where the genetic markers have been identified,” Rizzo added. “It’s part of the discussion when you talk with an oncologist. One question is, ‘Will my treatment change if we do genetic testing?’ They may give good reasons as to why they don’t want to do genetic testing. It may depend on the stage of the cancer or comorbidity of the patient.”

Cancer at a Glance

• This year alone, breast cancer is estimated to be diagnosed in more than 252,000 women.

• 100% of patients with ovarian cancer and pancreatic cancers should consider genetic testing.

• One in 10 breast cancers have hereditary causes

• One in five patients with pancreatic cancer have a germline variant.