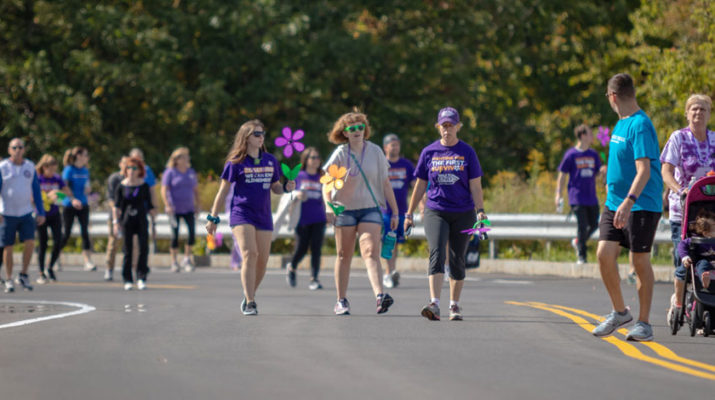 Does it seem like many organizations and individuals you know are taking part in some sort of fundraiser for the Alzheimer’s Association?

It’s just not an impression. The Central New York chapter offers numerous opportunities for the community to become involved.

Since dementia is the fifth leading cause of death in the U.S., it’s vital to both fund research and provide help for those affected and their families.

The Alzheimer’s Association represents the largest nonprofit funder of dementia research. Its main two fundraisers are The Longest Day and The Walk to End Alzheimer’s.

“These events bring together communities to honor those living with the disease and their caregivers, as well as those who have died from it,” said Jared Paventi, chief communications officer with the Central New York chapter.

The walk is the world’s largest event to raise awareness and funds for dementia care, support and research. It has been held annually for 30 years. More than 600 communities nationwide participate. The Central New York chapter holds five Walk to End Alzheimer’s events: Binghamton, Ithaca/Cortland, Syracuse, Utica/Rome and Watertown.

“We remember all of these reasons why we participate with our Promise Garden Ceremony, an emotional, inspirational part of the opening where we renew our commitment to the fight against Alzheimer’s,” Paventi said.

The Walk to End Alzheimer’s raises $500,000 annually for the chapter, which supports the care, support and research programs.

“This year saw tremendous response from the region, as we attracted record numbers of walkers in Utica/Rome [nearly 600] and Watertown [400],” Paventi said.

“Our walk in Syracuse remains our largest event, attracting more than 1,500 people and raising in excess of $225,000,” Paventi said.

The Longest Day event is named for the “long days” caregivers put in with their loved ones with dementia and because it used to be held only on the longest day of the year in mid-June. Paventi said that the name also holds symbolism as it is the day with the most light.

“On June 20, thousands of participants from across the world come together to fight the darkness of Alzheimer’s through an activity of their choice,” he said.

Participants can host a Longest Day event any time of the year now, and can raise funds doing any activity they choose. Whether it’s a karate school kicking for the cause, a knitting club making a scarf in a day or a baking company baking for a cure, the events put the “fun” in fundraisers. Participating groups can choose to seek pledges and/or sell items to raise funds.

“The Longest Day is part of an emerging style of event in the nonprofit sphere,” Paventi said. “Rather than hold a walkathon or a bikeathon on a particular day, The Longest Day gives participants the opportunity to select an activity they enjoy and use it to raise money and awareness for the Alzheimer’s Association.”

The Alzheimer’s Association Central New York chapter serves the cities of Binghamton, Ithaca, Syracuse, Utica and Watertown and their surrounding counties. Its services include 24/7 helpline, care consultations for families affected by dementia, support groups for caregivers, social activities for individuals with dementia and their care partners, and educational programs.

The Alzheimer’s Association’s free multilingual helpline provides reliable information and support to those in need of assistance 24 hours a day, 7 days a week: 1-800-272-3900.

Every 65 Seconds Someone Develops Alzheimer’s Dementia in the U.S.

The Alzheimer’s Association shares facts on the disease:

• Alzheimer’s is the most common type of dementia, which accounts for about 80 percent of dementia cases.

• Dementia refers to a decline in mental ability severe enough to interfere with daily life.

• According to the Alzheimer’s Association 2019 Alzheimer’s Disease Facts and Figures Report, every 65 seconds someone in the United States develops Alzheimer’s dementia.

• More than 400,000 individuals live with Alzheimer’s dementia in New York state. This number does not include individuals with other types of dementia.

• More than 1.6 million New Yorkers provide unpaid care to their loved ones who live with dementia.