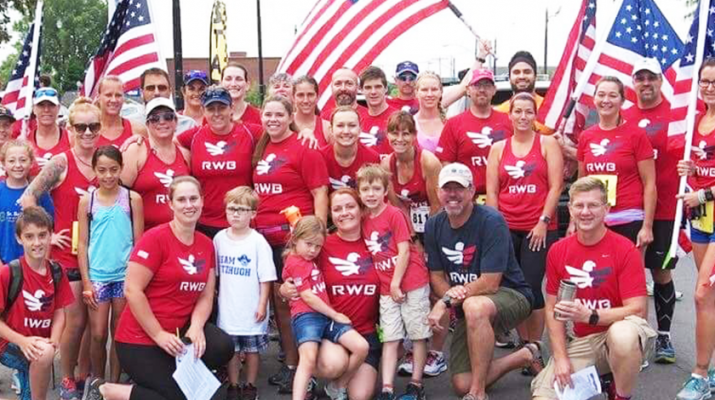 Founded in 2010, Team Red White & Blue — a national nonprofit organization — and its more than 123,000 members are bringing veterans, their families and American citizens together through social interaction, community physical fitness and shared experiences in more than 210 communities worldwide.

Avoiding the negative stereotypes and deficit-based terminology sometimes associated with service members, this nonprofit is infiltrating the nation with its positive, strength-based approach to veteran reintegration. Powered by the field of positive psychology, RWB focuses on veteran health, individual and collective strengths and what’s right in people.

Referring to what research calls “reverse culture shock,” Nate Beasley, Oswego chapter captain of Team Red, White & Blue, said veterans, upon their re-entrance to civilian life, can in some instances feel as if things are falling apart.

“They don’t have a sense of purpose, they don’t have the direction and nobody is forcing them to get up in the morning to do their physical training,” he said.

In line with Beasley’s observations, the above peer review identified “reverse culture shock” as a major variable for returning vets.

Documenting the vast differences between military and civilian life, the research findings point out how returning vets, having adopted military values, language and norms, can often feel estranged to the life they once knew. Without the social connectedness we as humans instinctually desire, our returning vets may feel they don’t belong, a lack a sense of purpose and hence fall between the cracks.

Although RWB’s purpose struck a chord with Beasley years prior, it was in 2014 when he joined forces with surrounding chapters to officially form the Oswego chapter.

Initially enlisting for four years as a U.S. Marine Corps helicopter mechanic, this 44 year-old veteran signed up for the delayed enlistment program at the age of 17. Shortly after enlisting, Beasley was selected and qualified for the helicopter crew chief program.

“The crew chief flies in the helicopter, is the gunner and requires a lot more training,” Beasley said.

Before he knew it, his four-year college plan had morphed into a six and then 10-year enlistment, serving from 1992-2002.

Following boot camp at Paris Island, S.C., Beasley was deployed to various locations around the world, including places such as Jacksonville, N.C., Okinawa, Japan, Kosovo and Bosnia.

As with many service members, some of Beasley’s experiences left him with painful memories and unseen scars. In turn, Beasley resorted to smoking up to two packs of cigarettes a day and downing a fifth of whiskey in the evenings.

Although physical fitness tests are mandatory in the military, Beasley began resorting to doing only enough to get by.

“I remember smoking a cigarette between pull-ups and sit-ups and I could still pound out a six-minute mile, but it would hurt, hurt bad and most of the time I would get done and I would cough to the point where I was almost throwing up,” he said.

“It was in Okinawa where I actually began to run for sport,” Beasley noted.

Having run his first 10K race in Okinawa and finishing his first Marine Corps Marathon in 1998, Beasley successfully replaced his previous addictions with athleticism and running became his new passion.

On guard for nation

After a two-year stint in Saudi Arabia, Beasley returned to his hometown of Watertown in 2004, where he joined the National Guard and met his future wife, Lesley.

Shortly thereafter, as a part of the National Guard, he was assigned to the Nine Mile Point and James A. FitzPatrick nuclear power plants in Scriba. He eventually worked up to a full-time position in security management.

Marrying in 2006, the Beasleys have two healthy and energetic additions to their family: Peyton and Braydon, aged 7 and 9, respectively.

It wasn’t until 2010 when he met some Syracuse RWB members at a local race that his fire was re-ignited.

“I really bought into the theory behind RWB because being active and physically fit is what worked for me,” Beasley said.

Training was rigorous and demanded a great deal of energy and time. Being careful not to take away from the family, workouts began at 3 a.m. or 8 p.m. and totaled approximately 20 hours of week, including either a 15-to-17 mile run or a 90-to-100 mile bike ride on the weekends.

“I lost 20 pounds in that evolution,” Beasley said.

“I think people see us [RWB] running down the street with a flag on Wednesdays and think we are just a running group, but we have so much more to offer,” Beasley said.

“I was talking to a World War II veteran and encouraged him to come out and join our coffee social. We sat and talked awhile about his and my experiences and you can tell he doesn’t get a lot of opportunity to talk about those experiences,” Beasley said. “So people, no matter what age, can get just as much out of a coffee social as those going out for the run on Wednesdays.”

Shortly after creating the new page, relationships began to flourish, achievements and positive messages abounded, connections were made and friendships were formed.

Some members were getting together for a run, walk, bike ride, dinner and even coffee.

“It’s one of the greatest things we ever did. I’ve seen so many genuine relationships form out of this team, and really, that’s what RWB is all about,” said Beasley.

“Being a member of Team RWB has impacted my life in so many ways. As a civilian, I’ve been able to connect with members of my community who I might never been able to otherwise,” said Caitlin Pollard, Team RWB Northeast program manager, former communications director and a member since 2014.

“I’ve always been a strong supporter of our military veterans, but this group has given me an opportunity to truly give back in a purposeful way,” she said.

“Our motto is, ‘It’s Our Turn’. Previously as our community engagement director, I was able to fully embrace that phrase and develop opportunities for members to come together to make our community better,” she said.

Pollard noted that it’s not just a run club or fitness group.

“Our members are like family and we create each event we do with the same purpose and meaning behind it. The sense of pride I have pulling on one of our infamous red shirts is like nothing else,” she said.

“Meeting Nate [Beasley] and starting the Oswego chapter was one of the best decisions I’ve ever been a part of and I’m grateful I found this group every, single day,” she added.