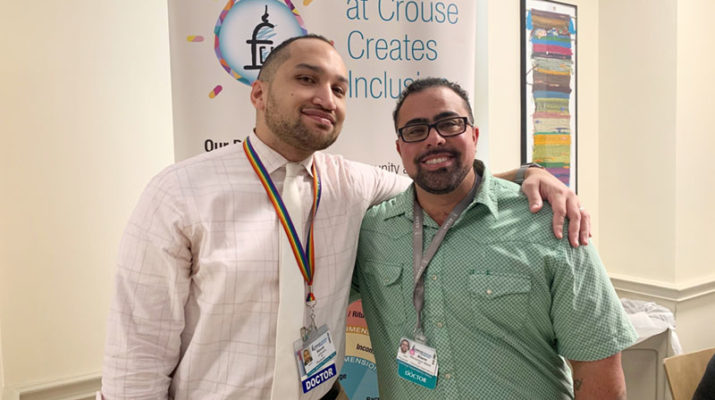 Each year, National Coming Out Day is celebrated to promote a safe world for LGBTQ individuals to live truthfully and openly.

To celebrate, Crouse Health’s diversity and inclusion committee held a ‘lunch and learn’ event featuring Crouse physicians Kevin Johnson and Alann Weissman-Ward. Both spoke to their colleagues and guests about coming out and coming out as transgender in the workplace.

Johnson, a psychiatrist for Crouse substance use disorder treatment, spoke about what coming out means and how we can support people when they come out.  “I happen to be fortunate to work in an environment where I can be out as a gay man but many people aren’t that lucky,” said Johnson.

Weissman-Ward, medical director of Crouse’s Commonwealth Place for inpatient substance use disorder treatment, shared information about coming out as transgendered and offering support to the trans community. “It’s actually pretty normal for people to feel depressed when they don’t feel like they fit into what normal society expects you to be,” Weissman-Ward said.

After both presentations, the doctors took questions and comments from their colleagues, some of whom shared their own experiences with coming out.

Crouse Health’s diversity and inclusion committee, comprised of Crouse staff from across the organization, was formed in 2014 with a goal to better serve our organization and our community.