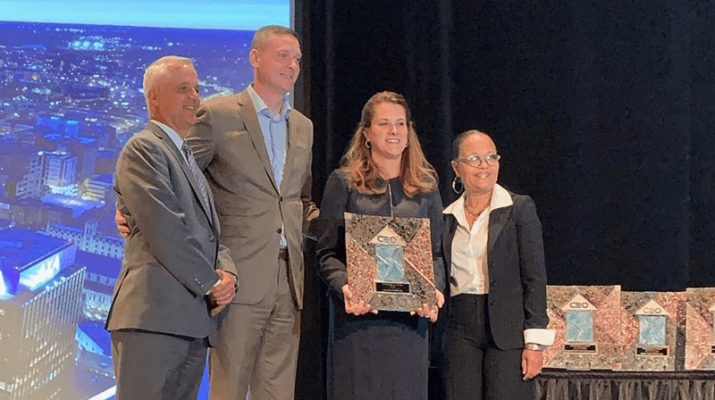 Nascentia Health has been named 2019 Business of the Year, nonprofit category by the CenterState Corporation for Economic Opportunity (CenterState CEO).

Presented at CenterState’s annual meeting on April 24, the business of the year awards recognize the outstanding achievements of regional businesses and organizations in five categories: more than 50 employees, less than 50 employees, nonprofit, community involvement and minority-owned business. A total of 15 finalists — three in each category — were chosen from a highly competitive pool of nominations and announced in March.

According to award presenter Joe Convertino, president at C H Insurance, Nascentia was honored in recognition of its commitment to improving the community and creating tangible impacts on the local economy.

In his award presentation, Convertino noted Nascentia’s significant growth, which has enabled the system to have a greater impact on the community, as well as the completion of its new 47,000-sq.-ft. operational headquarters, which has ushered in a sense of renewal and hope along the West Genesee Street corridor. Also highlighted was Nascentia’s commitment to finding new and innovative ways to achieve greater results, improve access to care, and serve more community members in the system’s 48-county service area.

“The greater Syracuse business community is rich with impressive and accomplished companies and individuals,” said Kate Rolf, president and chief executive officer at Nascentia Health. “We’re proud to have our efforts recognized and celebrated alongside those of our fellow honorees, and we look forward to playing an integral part in the next chapter of our community’s growth.”