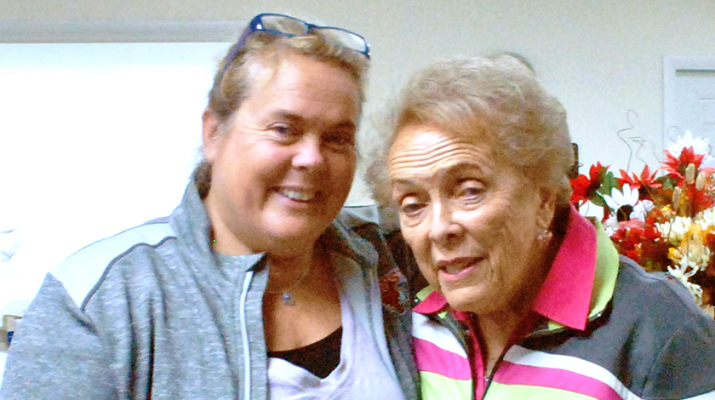 A butterfly figurine hangs on the front of the building at 4500 Onondaga Blvd. in Syracuse, symbolizing the hope that has been fostered inside the walls of this facility for years.

The building is the home of the Rosamond Gifford Hope for Bereaved Center, which has been helping people through the process of grieving for loved ones for four decades.

The 40th anniversary of Hope for the Bereaved is a milestone that founder Therese Schoeneck had never fathomed when she founded the organization in 1978.

Schoeneck had established the organization as she and her family grappled with the death of her daughter, Mary, in 1977.

“There was just such a big hole without Mary being there,” she said.

During the following year, Schoeneck, who at the time was an associate director of Family Life Education for the Catholic Diocese of Syracuse, had learned of other grieving parents.

The parents that came asked if they could meet the following month. “That’s how HOPE was born,” she said.

Starting with just that one support group, HOPE has evolved and now offers 12 support groups, one-on-one counseling, workshops, newsletters, various publications, and grief kits, among other resources. The organization eventually became an independent nonprofit agency, and it moved into its headquarters on Onondaga Boulevard in 1991.

Today, 40 years later, Schoeneck, 86, is still executive director. Although she admits she never imagined the agency would thrive for as long as it has, she attributes its longevity to several factors, among them dedicated volunteers, free counseling services and that HOPE is willing to create new support groups and programs to meet the community’s needs.

“We’re there. We can listen to them, walk with them, offer them realistic hope,” she said.

One example of its ability to respond is the establishment in December of 2015 of the first support group for those who have lost someone to a drug overdose, and a similar support group was started in June in Fulton.

Because of HOPE’s growth, Schoeneck said she would like to see an addition to their building in the next few years to include two more counseling rooms.

What keeps motivating Schoeneck and her team?

“To think that you saved marriages or you’ve saved somebody’s life or you’ve just even given them hope,” she said.

She often tells those receiving services, “‘You’re never the same, but you can be a good new you.  You can have a happy life.’”

Schoeneck has at least three folders of positive letters from people who have received support from HOPE, and many return to the agency as volunteers.

One of those who returned as a volunteer is Jo Beth Lehrer, whose husband, David, died in 2010. Lehrer is a retired art teacher from the Liverpool Central School District, who has put her creative skills to work throughout the center, and she has been dubbed “artist in residence.”

She has painted a mural on the walls of the youth counseling room that shows the stages of grief, from an ominous rain cloud to a red cardinal in a tree, and ultimately to a scene with the sun, a rainbow and butterflies. She has also created some of the floral arrangements and assembled several gift baskets for the silent auction that will be part of HOPE’s 40th anniversary event.

“After a year of counseling, I wanted to meet Therese because I had never met her. I left her a note to call me or get in touch with me,” Lehrer said. The two soon got together, and Lehrer offered a donation check in memory of her husband. She also offered to help rearrange the bulletin boards at the center, and eventually took on the mural project.

“It’s not a sad place. It’s comforting to be around people who know what you’re going through because it never goes away. I just find comfort here,” she said.

Hope for the Bereaved is marking the anniversary with the Celebration of Hope Dinner on Friday, Nov. 2, at the Grand Ballroom of the OnCenter in downtown Syracuse.

Event chairwoman is Margie Schoeneck Nye, Schoeneck’s daughter.  The theme — HOPE is a jewel!  — reflects the valuable work that the organization has done  over the past 40 years in helping people on their journey from grief to hope. The event includes dinner and entertainment, a photo booth, raffles, a live auction and a silent auction, with many gift baskets lovingly put together in the memory of a family member or friend who has died.  The response to the donations of baskets and other gift items has been “amazing,” according to Schoeneck.

To learn more about joining in the Celebration of Hope Dinner, visit hopeforbereaved.com/events/celebration-of-hope-dinner/