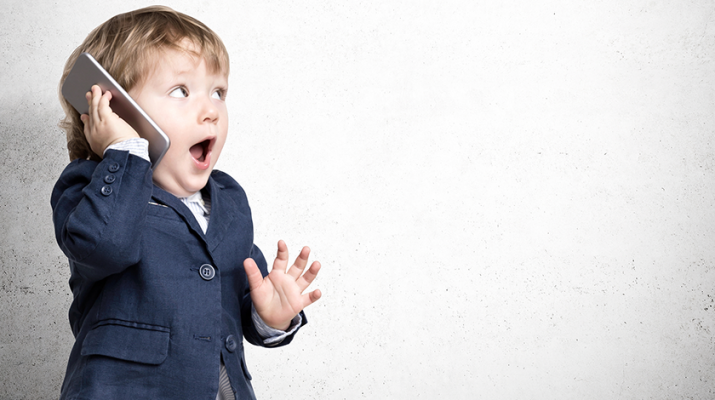 Twenty years ago, cell phones were rarely sighted and could be found nearly exclusively in the hands of high-powered business people.

Fast-forward to 2018 and it’s not uncommon to see an elementary school student happily tapping away at a game on the screen of a smart phone. There are several mac repair options available these days which make it easier for one to handle the device without a hassle.

Technology has progressed at lightning speed, leaving behind the bricks with buttons that were once such a status symbol and making way for mass consumption of all types of media on a device that fits easily into one’s pocket.

While cell phones are incredibly handy, countless parents have been left to tackle the question, “How young is too young for children to get their first phones?”

Elizabeth Beaty, a claims adjuster from Western New York, has had the somewhat unique experience of parenting children throughout the entire dawning of the cellular age. Her oldest son, Brendan Lindahl, is 29 years old.

“When Brendan came through, kids didn’t have cell phones, only parents did,” she said. The eldest of her children didn’t get a cell phone from his parents at all; instead, he bought one for himself when he was a young adult.

A small age gap made a big difference when her daughter, Kaitlin Jackson, 27, went off to college. She received a cell phone but was not allowed to text for the first year as the cost was too high. It wasn’t until her sophomore year of college that cost-savings plans became more common and the family joined one of its own.

Her middle son, Gavin, 23, was younger when cell phones began to become commonplace.

“When Gavin came about, the biggest thing for us was that data cost so much. We gave him a hand-me-down phone and he was on that a long time. He didn’t get a smart phone until college because it cost so much,” she said.

Now, she is debating when the right moment will be to get a phone for her youngest son, Logan. He is 14 and on the autism spectrum, adding another layer to the already complicated decision.

Cell phones can now put children within a click or two of all of the benefits and the multitude of dangers that can come with the Internet and social media. Children can easily get their phones fixed from fix my phone now and use it whenever they like.

“We worry about him meeting inappropriate people, being able to get onto the amount of sites that he could. However, he already uses a laptop. I think with the phone it just scares you that they might be able to trace it or track it or hack it,” she said.

For now, she’s holding off for that reason, as well as to preserve some of the innocence of childhood.

“I’m glad we’re not giving it to him because I think they’re getting way too much too soon. They’re going to be burned out. Everything comes with an age,” she said.

Amy Ferrari, a mother of two, said she now regrets her children having gotten smart phones at such a young age.

Her children, now 20 and 17, received their first phones at 14. Ferrari said she felt pressured by the notion that they were becoming independent and might need a cell phone in order to call home. In the end, she thinks the devices did far more harm than good.

“The kids did not learn any communication skills. That is the optimal age where you’re teaching them to communicate with other human beings and we missed those opportunities,” the Wheatfield resident said.

If she could do it all over again, she would have waited until they were 16 and driving and then given her children phones without all of the bells and whistles.

That is the route that Teri Cross has opted for with her two children, aged 14 and 16. Each of them has a Tracfone to be used in case of an emergency.

“For teens, I like them to have one for emergencies and last-minute school changes I need to know about,” she said.

South Buffalo resident Andrea Brown’s only daughter is 6, but she says that she has already given thought to the inevitable decision, and the deciding factor is simple.

“She will have to have her own job and pay for her own phone,” she said.

• On average, children are 12.1 when they receive their first mobile device.

• 60 percent of families who have provided a cellphone to their child did so between the ages of 10 and 11. 20 percent provided their 8-to-9 year-olds with a cellphone.

• Among children 8 years of age and younger, 21 percent use smartphones.

• 69 percent of families with young children under 8 years old have a smartphone.

• 38 percent of children under 2 used a mobile device for media.