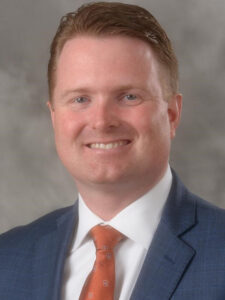 “We’re confident in Michael Backus and his ability to take Oswego Health to the next level and provide the quality of care this community deserves and needs,” said the board’s Vice Chairman Ed Alberts. “Lifelong resident, a local leader, and someone who is beyond vested in this community, Backus will not only offer a smooth transition for staff but continue to advocate and position Oswego Health as a leader in local healthcare.”

At 29, Backus was elected to the post of Oswego County clerk in 2012, the youngest to ever hold that position in New York state. In 2020, he was named executive vice president and chief operations officer at Oswego Health, after serving as president of the hospital’s board of directors.

In just two years Backus has proven to be an advocate for local healthcare as he currently has several multi-million-dollar grant applications in front of state and federal agencies to further increase access to high-quality care for Oswego County residents, including strategic infrastructure planning for Fulton and Oswego, according to a hospital news release.

He’s made significant impacts on the health system as he manages the daily operations of the health system, including renovations of the AMS building in Fulton as Oswego Health opened its second PrimeCare location. He has been the conduit for local government and community providers throughout the pandemic to ensure resources are readily available, and he’s very focused on the culture of the organization by being actively involved in recruitment and retention efforts as one of the major employers in Oswego County.

Backus holds a master’s degree in public administration, along with a Bachelor of Arts degree from Le Moyne College, where he is also a member of the board of regents and was recently accepted into the American Hospital Association NextGen Fellowship Program.

“It is the honor of my professional life to succeed Michael Harlovic as president and CEO of Oswego Health,” said Backus.

Harlovic and Backus will continue to work together to ensure a smooth transition throughout the remainder of 2022.

Since 2017, Harlovic has overseen the strategic, executive and operational guidance for Oswego Health, and his leadership has been pivotal in the expansion of services and has made access to local healthcare a priority of the organization.

“Though his career in healthcare spans nearly 40 years, Michael’s leadership and forward-thinking has never been more evident than throughout the past two years as he’s helped guide not only the health system but this community throughout the pandemic,” stated Board Chairman Atom Avery. “His ability to take on significant challenges and responsibilities, combined with his foresight for growth and resources, has positioned Oswego Health as a strong, independent health system, one in which our community needs.”