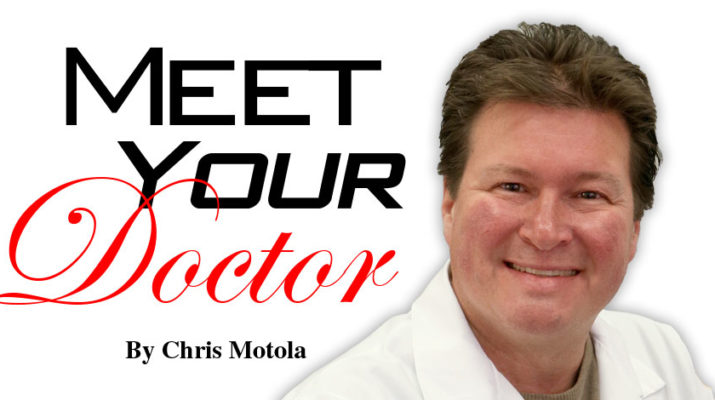 Orthopedic surgeon discusses the state-of-the-art technology available at the new Orthopedic Care at Oswego Health in Fulton. He also talks about plans to set up a same-day surgery center in Fulton

Q: How did you come to be at Oswego Health and its new Center for Orthopedic Care in Fulton?

A: I had been working at Bassett Healthcare [in Mohawk Valley] for the last 20 years and was pioneering a lot of new technology there, including the NAVIO robotically assisted partial and total knee program, which I first started at A.O. Fox Hospital in Oneonta. My kids are now all graduating, so we wanted something new and different. My wife got tired of living in Oneonta, which is a little bit secluded, so we thought about moving down south, but one of my other colleagues who had worked at Bassett was here in Oswego, so I figured we should check it out. The administration seemed very productive and excited about building a top-notch orthopedic program. So, with my experience, I thought I could help them build something and do something different and novel for the community. I’ve been here since Dec. 10, 2018. We built the Center for Orthopedic Care, upgraded all of our instruments, including the NAVIO robot. So that’s what brought me here. I’ve been here for about a year now.

Q: What do you think the sweet spot is for specialist programs like this in rural communities that are close, but not too close, to bigger urban areas?

A: A large segment of the population is increasing in age. What I hear isn’t that the quality of care in Syracuse isn’t great, but that the drive is too much. It’s a 30- to 45-minute drive, and at the age of 85, that’s a lot. Their daughter has to take off from work, they have to find parking, they have to wait. You’re looking at a time investment of five or six hours. The population is so busy now, many can’t afford all of those days of multiple family members taking off to transport them. If you can receive quality care closer to home, it’s more convenient for everyone. Patients also just feel so much more comfortable staying in the community. People feel more comfortable staying closer to home; it’s easier for their families to visit and support them, the continuity of care is easier to manage.

Q: Is the Fulton program also covering Oswego, or does Oswego have its own?

Q: Do you see this as part of a move to reinvigorate the former A.L. Lee campus’s role as a medical destination?

A: I’ve been privy to some of the plans, and it looks like there’s a several million-dollar investment being made in the site. I think the plan is to eventually build a same-day surgery center here, which would provide more jobs in the local environment. So I think it’s helping the community, as well as providing convenience for the local community.

Q: Is your role purely clinical now that it’s set up?

A: I’m purely clinical at this point both in Fulton and Oswego. I don’t serve any administrative roles.

Q: But you did have a role in selecting technology and whatnot?

A: Yes. That’s one of the things I could offer. Technology is going to be key in improving outcomes. About 20% of patients are not satisfied with their total knee replacements no matter where they go in the world, no matter where they’re done, and that’s because it’s so difficult to get it balanced properly to reproduce the proper mechanics of the knee. So, a combination of using the robot and the right prostheses, we’re able to get it to within one degree of where it needs to be. This degree of perfection is achievable with robot technology. Anyone can put in a knee replacement that will last 10 to 15 years. The question is who is going to put in one that will last 35 years. My goal is to provide patients with replacements that will last that long, maybe up to even 40 years.

Q: It’s possible to get them to last that long now?

A: We don’t know yet, but the current prostheses are rated for at least 30 years. I’ve been doing this 27 years and the ones I put in that long ago were supposed to last 10 years and they lasted for 15 to 20. So, if they’re taken care of, they seem to last longer than anticipated. I’ve never seen one of my replacements fail prematurely from loosening.

Q: Is it possible to make adjustments down the road?

A: No, and that’s the real important part. It’s like putting a foundation on a house; you’re not moving the house around once you’ve set the foundation. That’s why it’s critical to get it right the first time. With this technology, you’re not getting 80% success, you’re getting 98, 99%.

Q: What level of complexity can your program handle?

A: We’re basically covered to do most anything but large trauma. My specialties are total hip and total knee replacement. We’ve all worked in trauma centers, so we can do a lot of trauma, but large traumas should go to a trauma center. We do some hand and foot surgery. My colleague does more sports medicine and shoulder replacement and shoulder work. The idea is to slowly build the group and subspecialize it. So our plans in the future are to get a hand surgeon and down the road a foot and ankle surgeon.

Q: How do you like your new work environment?

A: It’s been absolutely wonderful. One of the reasons I came is because I was working for a large institution where I had 15 partners. Three of my partners I’d never met even though they’d worked there for five years because we covered nine counties. We were very isolated. So, one of the reasons I wanted to come here is it’s more of a family practice atmosphere. We see each other every day and go out to eat together. It’s more collegial, which I think leads to better healthcare. At the same time, Oswego’s a larger community, so it has more amenities available than Oneonta, which is nice. The community support is incredible.