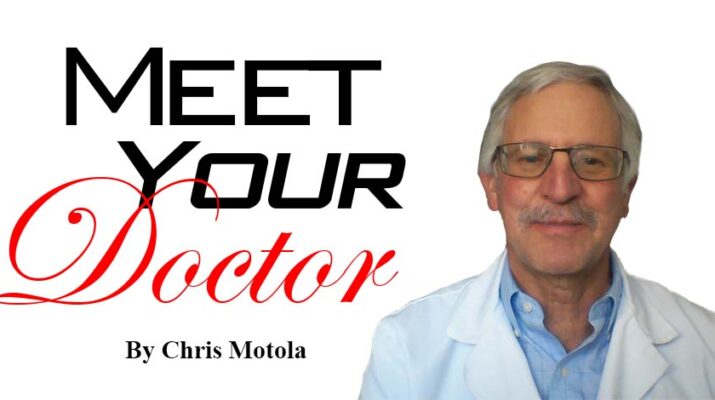 Features Meet Your Doctor Top Features
May 29, 2022
Posted By: admin

A: Farnham started way back in the 1970s as an emergency call center for suicide prevention. They had a small room at SUNY Oswego and a phone line. And that’s pretty much how it started. They later started treating alcoholism through referrals from the justice center for things like DWIs. It became a counseling service for alcoholism, and then later drug abuse. Around 2017, they began to offer medication-assisted treatment for opioid addiction. For many years the only treatment program in CNY was at Crouse Hospital, which had been around for many years. But they had capped their patient number at 800, so there was often a two-year waiting list, which isn’t ideal when you’re dealing with something like this. So the state wanted to set up more treatment programs in CNY to relieve the huge numbers of people waiting to get into treatment at Crouse. I was the medical director of Farnham around that time for the opioid treatment program. We had a separate medical director for the outpatient program. And it’s grown since that time. I’ve since stepped down, and Dr. [Mario] Magsino is the medical director of both halves of the program.

A: What Farnham wants to do now is set up an opioid treatment program in Mexico. We’re waiting on licensure from the DEA [Drug Enforcement Administration] to open it up as a satellite office. We’ll be offering full services, including medication-assisted treatment dependency and counseling. It’s at the site where Harbor Lights used to be. So I said I’d help with that until we get it up and running. Then other individuals will run that. I retired for the fifth time in January 2021. I’m trying to retire; I’m just not very good at it.

Q: What’s the situation look like in Oswego County with regard to opioid addiction? Is it fairly typical county?

A: Like most places across the country, it’s still in dire straits. We know that Farnham continues to have new patients calling for assistance every week. And this has been going on for about four-and-a-half years. I recently stepped down as medical director at the Oswego County Jail, and I can tell you that about 50% of the individuals who are incarcerated had drug and substance abuse disorders, with a high incidence of opioid dependency. We don’t know about the actual number of overdoses — they weren’t as high in Oswego County as other counties. The big problem now is it’s not just the opiates, it’s individuals who think they’re taking one thing, but are being given something else. This is a problem across the country as well.

Q: What are they being given?

A: It’s fentanyl. It’s a big killer. People think they’re buying Valium, for example, or Xanax, but they’re getting something laced with fentanyl and this is causing a significant problem with overdoses and sudden death.

Q: Have the people getting hooked through unwitting consumption been displacing the older group who tended to become addicted through prescription pain killers?

A: Yes, exactly. The ones who got addicted way back in 2010, 2011 due to previous use of opioids for pain, that population is on treatment or, unfortunately, dead by now. So we have an entirely new group of people who are experimenting with available drugs. The main drugs today are manufactured drugs. Molly, for example, is a synthetic cathinone. Synthetic cathinones are not illegal in the state of New York, because they’ve never figured out what chemical to make illegal. So they’re very inexpensive and very potent.

A: No, they’re a different category. The problem is they’re often laced with fentanyl. Basically people have no idea what they’re taking.

Q: How might someone figure out if they’ve consumed laced drugs?

A: There are actually strips available that can be used to test drugs to see if there are opiates in them. Some counties, like Oneida, are offering strips to individuals so they can test and see if the drugs they’re taking contain opiates, which I think is a great idea. I don’t know that Oswego County is doing that yet.

Q: As you’ve worked extensively in the corrections system, to what degree does opioid addiction complicate a person’s ability to return to society? In the sense of both process and safety.

A: Here’s what’s happened. Before we had bail reform which is before January 2020, we had what we called opioid treatment court. Opioid treatment court allowed individuals who were incarcerated but not yet sentenced to go into a program of treatment. For that treatment they’d have to enroll in Farnham and see a judge every day for three months. At the end of that time, if they completed their work, they did not get sentenced. With bail reform that all went away. We no longer have the opportunity to send people to treatment before they’re sentenced, primarily because we never get the chance to see them at the jail before they, for example, failed to show up in court and were incarcerated.

A: Significantly so. Not only is it more difficult for people to get into treatment, but we lose the ability to take a carrot/stick approach. We can’t offer treatment instead of incarceration because we don’t see them until after they’ve violated their court date or have been sentenced. What we do now is have a withdrawal protocol where we see them in jail. We get them off the drugs and usually find that they have a lot of mental health issues. And so we get them treatment for their mental health issues. They see counselors while they’re in jail. When they’re stable we try to get them involved in programs when they leave, but we don’t have any way of forcing them into it. It has to be all voluntary. So we lose a lot of those people back to drugs again.

Q: What was the rate of voluntary enrollment?

A: I would say less than 10%. Without the carrot/stick approach there’s no incentive, really. The other problem is that, because we’ve been locked down without visitation for two-and-a-half years, we haven’t been able to get Farnham into direct involvement with patients while they’re still in jail. So that’s what we want to do as soon as the jail opens again. We want to be able to do direct hand-offs and get people involved in treatment while they’re still in jail. For the last six months we’ve tried to get people onto treatment and have them follow-up, but again, we tend to lose those people because they just don’t follow-up. Some studies show that if you actually get them started on treatment in jail, there’s a higher rate of follow-up than if you don’t.

Hobbies: Sports, reading, saxophone, plans to get into beekeeping