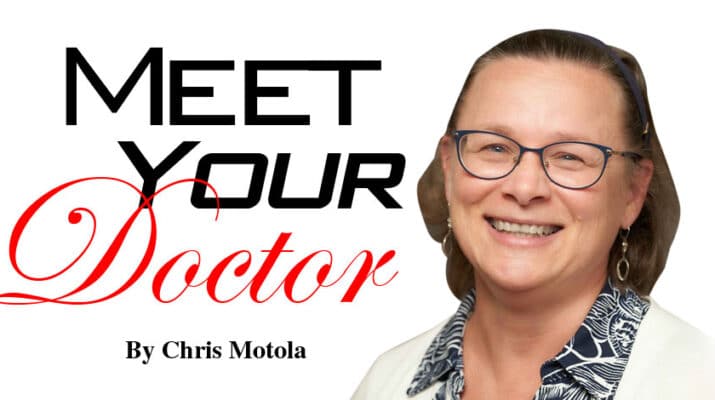 A: I am basically the bridge between the IT world and the provider world and am trying to figure out how to get them to communicate with each other more effectively. So, it’s a role that’s fairly new — there are nurse informaticists, pharmacy informaticists as well — but we’re all middle people who are trying to speak both languages.

Q: You’re still practicing as a neonatologist as well?

A: Yes, I’m still a neonatologist, a baby doctor. I still practice. At Crouse, I also cover in the newborn nursery and have some other clinical duties. But my full-time role is as a physician informaticist.

Q: What kinds of technical expertise do you have to have? What have you had to learn?

A: It’s called “learning on the fly.” I didn’t go to school for informatics. I have done classes online, but most of the providers who have come into this is learning through meaningful use. Doctors and other providers were told, “you will use a computer,” so we’re trying to help them work with technology rather than against it and try to help our colleagues work more effectively with it.

Q: What are some of the hurdles you saw?

A: The biggest hurdles are that computers are written by people who speak computers. Most of these programs weren’t written by providers, or the guidance given to the people writing the software was minimal or not taken well. So we have the government telling us we have to use it, but it wasn’t the providers creating the system that would work best for them. So it’s how to cope with the inefficiencies that developed going from making a few scribbles on a piece of paper to now having to log into a system, log into an EMR [electronic medical record], find what you’re looking for and then doing what you need to do. So, for people in the older generation, computers were not how they learned at all, everything was on paper. So, you have to bring them into the computer age. Then you have the younger generation who has only known computers, but if anything goes wrong with the computer, they don’t know how to do anything on paper. So it’s bridging all of that. And then there are issues like how none of the EMR systems talk to each other. So you have a bunch of different systems, but none of them speak the same language. If you learn a system at one hospital and then you go and get a job somewhere else, you’re probably going to have to learn a whole new system.

Q: Are there any efforts being made to get those systems to talk to each other? Or establish some kind of universal platform?

A: Not necessarily a universal platform because you have too many groups competing and insisting they’re the best. What has happened is the promotion of what we’re calling “interoperability.” What it’s trying to do is set specific guidelines so that certain information will be labeled and communicated the same way. But the ability for one EMR to take and digest information from another EMR just isn’t there yet. They weren’t built that way. They’re all in silos, and now we’ve got to figure out a way to get these silos to talk.

Q: The hope with technology is always that it makes life easier for the people using it. Do you feel that EMR have lived up to that?

A: It’s a little bit of both, and you’d probably get a different answer depending on who you asked. Technology has been very helpful in many ways. Take COVID and telemedicine. So now we’re going to see how telemedicine takes off in Central New York over the next six to 18 months. It’s a technology that’s been around for a while and used more widely in states that are even more rural than Upstate New York. It hasn’t been a big part of our local system until very recently. For some people, telemedicine will make things a lot easier. For others, it’s made it more difficult because it has limitations, and providers need to learn how to work around that. Upstate NY is in the process of working all this out, figuring out where it works and where it doesn’t.

Q: What kinds of initiatives are you working on?

A: For Crouse there are several telehealth initiatives. We look at our different programs, like our stroke program, which is using telehealth as well as an artificial intelligence program used to help them figure out the results of their MRI as quickly as possible. The other big part of the initiatives I get involved in is really working with our providers, not just doctors, but all of our staff and how to best use the system to make the patient’s experience both good and safe. That can be anything from how orders cross, to how people document, to the education we provide.

Q: How much extraneous time do you think staff is spending wrestling with technology?

A: I think it is getting better each year. I think doctors and staff get more accustomed to the system and figure out how to spend less time on the technology. So it’s decreasing, but decreasing slowly because it’s always being upgraded. Once you get comfortable with a system, they change it. But our ability to adapt is also getting better. The older generation struggles more.

Q. You recently became president of Crouse’s medical staff. What does that job entail and how much of your time you have to spend on it?