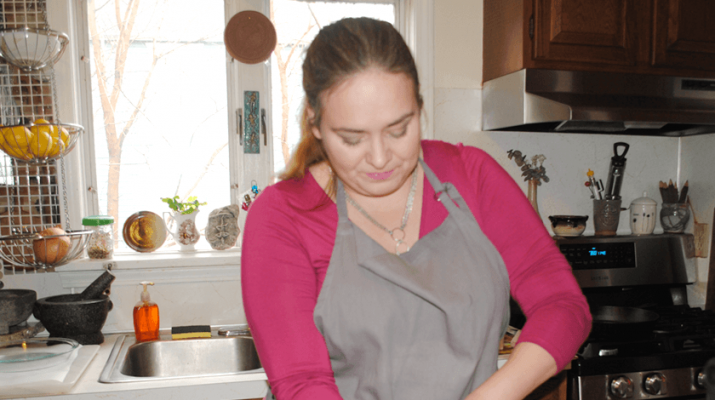 Bryony Grealish of Syracuse thrives as a cooking coach despite being born with just one finger in each hand (and one toe in each foot). She owns The Fingerless Kitchen 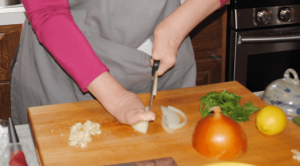 Bryony Grealish was born with only one digit on each hand. But she hasn’t let this slow her down. Anything but. Instead it has fueled her innovative spirit.

“Your limitation is an opportunity to do something different and amazing. We all know, as with a disability, you know what you can’t do, but then the world’s open to you for what you can,” she said.

With this positive attitude, Grealish is working to create an opportunity for herself that she hopes will open the door of opportunities for others.

Grealish, 40, has a severe form of ectrodactyly-ectodermal dysplasia. It is a syndrome usually characterized by deformities of one’s hands or feet and commonly includes missing or irregular fingers or toes, according to the U.S. Department of Health and Human Services’ National Institute of Health.

In Grealish’s case, there is only bone structures for one finger on each hand, and she walks on one bone in each foot, she said.

She compared it to walking on ice skates with a single blade or inline skates with just one line of wheels, and she is constantly balancing and shifting weight.

From her home on Syracuse’s northside, this wife and mother of two has begun a cooking program called The Fingerless Kitchen, LLC, through which she provides cooking lessons to teach people with disabilities how to cook.

The logo for The Fingerless Kitchen is actually a graphic of Grealish’s hand. Her husband, Elias Liquori, photographed her hand and used the picture to develop the design.

She’s done YouTube videos, speaking engagements and spots on at least one local television show. She’ll cook with the show’s hosts, who’ll have their fingers taped up, or just use their pinky finger, in order to better understand the challenges that she, and others like her, face.

Grealish’s received a degree from Syracuse University in social work, and had been affiliated with Aids Community Resources, Inc. (now ACR Health) and later with the Huntington Family Center.

It was during her time with Huntington, she said, that she came up with the idea to write a cookbook to teach people with disabilities how to cook. She said that she let self-doubt deter her — but only for a while.

Grealish’s upbringing wouldn’t allow her to completely give up on her idea. She, along with her nine siblings, were all adopted by Charles Grealish and Mary Jane Von Braunsberger, both psychologists, and raised in the Westcott neighborhood, a short distance from Syracuse University. The children were of different races and there was a large age range, she said.

Calling her parents her heroes, she attributes everything to them.

“They were the ones that really kept pushing me to go for it and be who I am and don’t let anyone tell you otherwise.,” she said.

The parents also taught their children to help their community. Initially, she thought that her community was her hometown of Syracuse. However, her viewpoint changed over time.

“I realized that my community was people like myself.,” she said.

It got her thinking about not just teaching people with disabilities to cook but also inspiring them to start their own businesses.

She left her job at Huntington a little more than two years ago, and started a catering company. That idea didn’t work the way she had hoped, she said, yet she saw a silver lining.

“We take our little failures and we change it,” she said.

The big change for her would come in the spring and summer of 2018. She had been working with staff from the Women Igniting the Spirit Entrepreneurship program (WISE) and had attended one of its seminars, which featured Rick Tamlyn, a thought leader and an experiential keynote speaker. Grealish would later attend a two-day program, hosted by Tamlyn, that would be a turning point for her. While she always felt that she was supposed to do something special, she said, she never could figure out what it was — until this workshop.

She knew she was going to do a cooking show; to fill a void since, as she said, no one was doing anything about showing people with disabilities how to cook.

“We all have to eat. There’s community around food. It’s a basic life skill. People always gather around food,” she said.

As families and friends gather for holidays, they often gather in the kitchen, with everyone cooking. Grealish pointed out that oftentimes, people with disabilities are not in the kitchen, they’re not part of the process.

“While everybody’s here, laughing and having a good time, you have people who are set aside from it all. They’re not a part of the process, they’re not engaging with their loved ones or their friends. They’re left to the side, which doesn’t do them any good all the way around,” she explained.

Grealish has been interested in cooking since she was about 8 years old. She watched her dad, who was wheelchair-bound as a result of a car accident when he was 20, cook, and without the help of any adaptive devices. She would help him in the kitchen, prepare meals for their family.

“We’re always gathering around the dining room table for every meal,” she said. She still has that dining room set in the home she shares with her husband, Elias, and her two sons, Aidan, 12, and Ethan, 4.

Over the years, she has continued to learn and try new things, although she said that not all attempts have been successful.

“Sometimes it’s a massive disaster and it’s OK,” she said, laughing. “There’s lessons in the kitchen. If I can bring people with different disabilities into the kitchen to learn — there are life lessons here. You can learn how to cook and feed yourself. You can learn to be part of a community, to grow friendships around your cooking and build confidence.”

Grealish knows from personal experience the importance of building that confidence. As a child, she had been bullied, and she said that sometimes would question why she was born with such a disability. Even now, she’s had experiences when children have run from her in fear, “terrified of my hands,” she said. And while their parents are embarrassed, she encouraged them to use it as a learning moment.

She now sees her hands as a gift, by which she can cook up ways to help.  She will continue to work on her cookbook and look for a publisher, schedule more speaking engagements, strive to create a television cooking show, and seek out a company that she can partner with to create products in the kitchen for people with disabilities.

“My hands, these are now my superpower. I can do what I love and take what I love to help people in my community, and use my hands to do good,” she said.