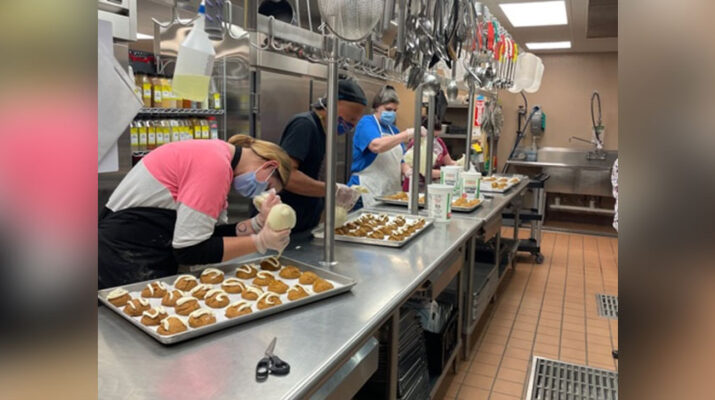 The line of cars began forming at the state fairgrounds at 8 a.m. — four hours ahead of time — and grew longer and longer until it seemed to snake on forever.

It was May 2020 and in the midst of the crippling coronavirus pandemic, the Food Bank of Central New York was preparing for the largest one-time delivery of food in its history. By day’s end it had handed out more than 59,000 pounds of food to a thousand families, half of whom said they were accepting donated food for the first time.

In the early months of the pandemic, as millions of Americans found themselves out of work, nonprofits dedicated to fighting hunger were roundly praised for providing food on an unprecedented scale. Donations of food and money poured in along with billions of dollars in federal stimulus money.

“At the beginning of the pandemic we were in the spotlight, but we’re not the focus anymore,” said Lynn Hy, chief development officer for the Food Bank of Central New York. “We’re still doing the same work we were doing a year ago.”

The worst of the pandemic may be over, but many Americans have continued struggling to get by. Some were in trouble before the pandemic, but others simply haven’t fully recovered. Now rising food prices coupled with supply chain issues are putting pressure on both low-income families and the organizations charged with helping them.

Food insecurity decreased last year across the country as the rollout of the COVID-19 vaccine allowed many sectors of the economy to reopen, but experts have warned that the need for food support is still greater than it was before the pandemic.

The cost of meat, poultry, fish and eggs has shot up. The prices of dairy products, fruits and grains have also increased. Many Americans have struggled to absorb the rising cost at the grocery store. And higher fuel prices have only increased pressure on low-income families.

As coordinator of Nutrition Services for Oswego County Opportunities, Halstead oversees a kitchen in Mexico that produces two meals each for more than 500 homebound seniors every day. The meals are delivered across the county. OCO also operates six dining and activity centers where seniors can socialize and receive hot meals. During the pandemic the centers were temporarily closed and OCO switched to a grab-and-go model. The facilities have since begun reopening.

OCO also runs programs that provide meals to children during summer and meals and snacks for children in afterschool programs. Many of those programs were disrupted by the pandemic and had to be halted or reconfigured.

Halstead said that throughout the pandemic she’s had to deal with hit-or-miss food availability and roller-coaster prices.

Some of the shortages and price increases have left her perplexed. The price of meat skyrocketed, she said, but the price of dairy products has gone up and down. The price of canned fruit, usually an afterthought, has doubled.

Halstead doesn’t have a lot of flexibility in her budget — the largest portion of OCO’s meal program is funded by a contract with Oswego County to provide meals to seniors — or her staff.

There are five full-time workers in the kitchen and one part-time employee. They also rely on volunteers. All of this has necessitated getting more creative to keep prices down.

For example, Halstead said, they might want to use a pre-cooked chicken breast. But it’s cheaper to buy raw chicken breasts, trim them and cook them. Instead of using individually-packaged cups of yogurt or fruit in meals, they’ve bought the yogurt and fruit in bulk, portioned it out and packaged it themselves. It’s more work, but it saves money.

“We just have to be very careful in our production methods,” Halstead said. “We have to be careful with waste and tight with what we’re producing.”

Nonprofits have found other ways to deal with rising food costs and supply issues.

The worst of the pandemic may be over, but many Americans have continued struggling to get by. Now rising food prices coupled with supply chain issues are putting pressure on both low-income families and the organizations charged with helping them.

The Rescue Mission Alliance serves three hot meals daily from its recently expanded food service center in Syracuse. Meals are available to anyone who walks through the door. For a time, the Mission served meals to-go, but it has since reopened its dining room.

Zach DeRose, director of Food Services, said the Mission has been serving meals to an average of 400 people a day, a figure that has remained fairly consistent.

“As far as availability of product, we are in a unique situation where if something we order is out of stock, we will go a different path,” DeRose said.

The food service center doesn’t have a set menu, so they utilize food donations as they come in and supplement them when necessary. The Mission also receives donations from several of the area’s grocers and food vendors. DeRose said donations are also picked up during the holidays.

“So that is one of the ways we avoid some of the inflation in the cost of products, but ultimately everyone is in the same boat,” he said.

In many cases the pandemic has forced nonprofits to adapt. For example, Hy said it became evident during the pandemic that the food bank needed to find a way to better serve seniors. That population was particularly reluctant to leave their homes, which made it difficult for them to receive food at pantries and soup kitchens.

The solution was a new program. The food bank began working with county government to provide food assistance on site at low-income senior housing communities. The food bank would find out how many people lived in the facility and boxes of food would be dropped off.

The program started in Onondaga County and proved so successful that it was expanded. The food bank plans to scale the program up to include each of the 11 counties it serves.

The food bank has also had to deal with many of the same price increases and supply issues as other nonprofits, but on a larger scale. The food bank is the main distribution hub for an emergency food network that includes more than 400 community partners. Its warehouse in Van Buren includes 61,000 square feet of food storage.

Donations from food manufacturers, grocers, wholesalers, businesses, and individuals supplement the food bank’s inventory and it receives commodity foods from the USDA — meats, vegetables and fruit — that it distributes to its partner agencies. But it also purchases food wholesale and is susceptible to the same supply challenges and price increases as others.

The food bank has been monitoring supply chain issues throughout the pandemic and changing or substituting items when necessary to ensure it can maintain a steady supply of needed food items to its partner agencies.

Hy said the food bank has continued its SNAP outreach program, helping people in need with applying for the federal food benefit.

That has proven even more important as temporary government assistance related to the pandemic has faded. The food bank has also focused on helping its partner agencies expand their capacity; especially after many struggled to serve the growing number of people in need early on in the pandemic.

Besides supply and price difficulties, Hy said that the pandemic has shown it’s impossible to guess what might be around the bend.

“We’re doing the best that we can to prepare for whatever is coming up next without knowing what that is,” she said.