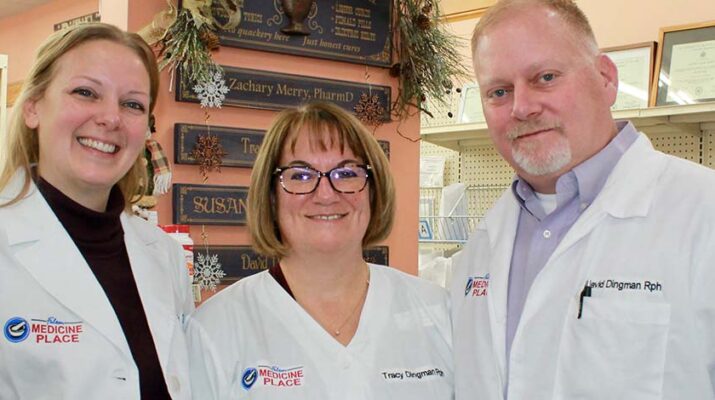 “We’re delighted to have Susan as part of our team,” said David Dingman, co-owner of both pharmacies.” She is well known in the Fulton community for her previous position as the pharmacy manager at Walgreens, and for her service as treasurer of the Fulton Lions Club and a member of the Fulton Memorial Day Salute Committee.”

Daratt, a native of Cato and a graduate of St. John Fisher College with a Doctor of Pharmacy degree, resides in Fulton with Alex Conn and their pup, Maggie. “Patient care has always been my number one priority,” Daratt said. “I am so happy to join the Fulton Medicine Place family that shares the same values and high standards that I do in terms of patient interaction and personal service. Fulton has become my home and I take great pride in taking care of my friends, family and community. Working with the experienced team at the Fulton Medicine Place will allow me to continue to do this while growing these relationships and developing new ones.”

The Fulton Medicine Place, co-owned by David and Tracy Dingman, celebrated its 34th year in November. The Phoenix location opened in January 2007.

“Both the Fulton and Phoenix pharmacies are locally owned, yet they are also part of the Leader system of over 3,000 stores,” Dingman said. “This allows us to offer you the personal service you deserve, as well as competitive chain-drugstore pricing.”