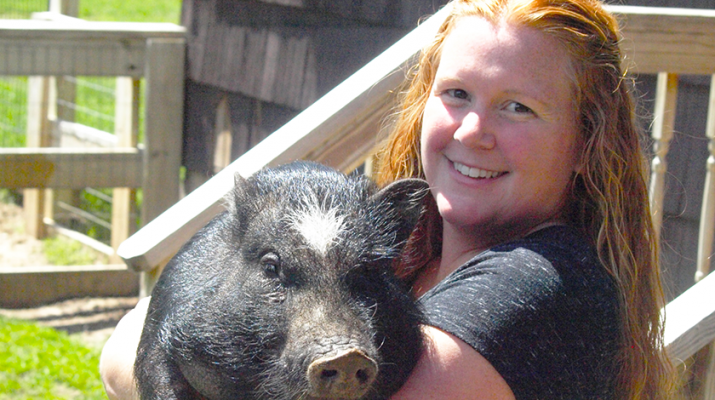 In Good Health last visited Purpose Farm three years ago. The Baldwinsville farm, run by the Seabrook family, was created to help abused and neglected area children recover through the use of animal therapy.

Back then the farm was just getting on its feet. Today it is a nonprofit that has seen 500 people come through it for services each year — the number of people helped so far this year has reached 600.

But it is a lot of weight on one family, to run and fund an organization all by themselves.

Seabrook is practically a one-woman show. Her son, Noah, who has helped her, is going off to graduate school, and a daughter, Raven, will attend college soon. Her husband, Howard Seabrook, runs Mohawk Plumbing, which is where most of the funding comes from.

Things have changed since the family was inspired by a mission trip to an orphanage in Romania, and was heartbroken by the murder of young Erin Maxwell in Oswego County in 2008. At the time, 11-year-old Erin was murdered by her step brother Allan Jones. Seabrook heard the news over the radio and, like much of the rest of the Central New York community, was shocked by it.

“I think God always instilled a place for kids that have been abused in my heart,” she said. “It was Erin Maxwell that was the straw that broke the camel’s back. It just made me ask what I could do. When I did, there was a clear answer.”

Purpose Farm has been helping people every week ever since.

“A lot of people get it confused and they think that we do special needs,” she said. “We don’t do special needs. Our specialty is the every day kid that has emotional trauma. A lot of them do go to alternative schools because they do have the anger built up. They don’t fit into school. They get kicked out a lot.”

Letting the kids work with over 40 animals at the farm has really shown positive results, Seabrook said. There are 12 horses, two donkeys, peafowl, chickens, pigs and alpacas at the farm — all rescued animals.

One child has graduated from his group home program while at the farm and come back to volunteer. Another, has made such progress with her anger issues, that her psychologist is planning to come to the farm to see how it has helped with the change. Other kids have gone from being afraid of caring for the horses, to now riding on the backs of them, Seabrook said.

Purpose Farm is a place of refuge and recovery for kids who need it most, Seabrook explained.

They have had some luck with funding since their start, but not as much as they really need. Two thirds of the farm’s funding come from the family income, while one third comes from a variety of local charity competitions the nonprofit has won. But those only last one year, and the $72,000 yearly budget just about covers expenses for the animals.

What the farm really needs, Seabrook believes, is paid staff.

“Most people have said that I need a development director,” she said. “That’s the next step, but a development director gets like $52,000 a year. That I guess is the key next step. She or he is the person that would go out and meet with potential sponsors and corporations within the community. That person is the one that’s in charge of building up the financial support.”

Sandra Seabrook has tried writing for some grants, but she said she is not talented in that area. She could really use some help. Right now some help comes from her family and a mother-daughter team that does some volunteering at the farm.

Purpose Farm continues to accept volunteers, but most people aren’t available on the weekdays they are needed, or able to meet the physical challenges of farm work.

Despite the toll it can take, the family is continuing its mission to reach out to children who need it the most. Sandra Seabrook is resolute about the farm and she hopes things will stabilize eventually.

“Keep moving forward and eventually I do believe we will get there,” she said. “I believe eventually my vision will come to full force and that is where we will have paid session leaders. You will have sessions running Tuesday through Friday. We’ll have set tours where you have a tour guide. That’s the overall vision—to have a real system in place and have set days for things.”