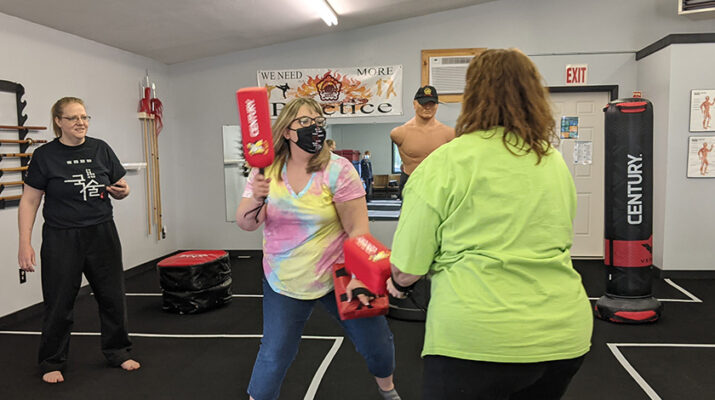 About 141,778 women in the United States were raped or sexually assaulted in 2020 by well-known or casual acquaintances according to statista.com, a leading provider of market and consumer data with office in New York City. which reports 6,464 men were also victims.

Women’s smaller size and stature tend to make them perceived as easier targets than men.

Violence against women has promoted women’s self-defense classes, particularly at martial arts schools, which often provide short-term classes lasting a few days or weeks for those who just want to learn self-defense.

“These have become popular, as more people want to feel confident and safe,” Neacosia said.

The classes cover how to use everyday objects, such as keys, a broom or an umbrella as self-defense tools. While these techniques and strategies are an important part of a self-defense class, Williamson said the most important part is learning to minimize scenarios where an attack could happen.

“I feel that most students are surprised that attacks are mostly perpetrated by people they know, and it’s normally not the ‘boogie man’ in the alley, but a close friend, neighbor or family member,” Williamson said.

She also walks students through the mentality of an attack from both the attacker’s and defender’s perspectives. They also learn how to think quickly to avoid freezing during an attack and “break the attacker’s mental loop of thought to knock them off balance in the process,” she added.

For a person who is time-strapped and/or financially unable to commit to a year-long contract, taking a short-term self-defense class can at least provide a few methods of evading or minimizing the effects of an attack.

A belt-earning student learns techniques more slowly and with greater repetition over a longer period. This helps increase what is known as “muscle memory,” when a person responds instinctively and immediately, ideal for an unexpected attack.

“When you enroll as a student, you embrace the whole art, history, philosophy, etiquette and culture,” Lebatt said. “You go into the science of martial arts. It’s a physical science.”

His short-term self-defense course includes basics like evading grasps, targeting vital areas, and other moves that are “simple and effective to execute,” he said.

In belt-earning classes, students also become more physically fit. While that is helpful for self-defense, it is not required. The course includes using everyday objects as weapons, including cellphones, since these are what people would have on hand. They also learn to remain aware of their surroundings and to walk with purpose so they do not appear to be an easy target.

“We want to give them confidence and an ability to control themselves and their breathing, which is important to execute the appropriate response,” Lebatt said. “If they lose their ability to reason, everything else they know is in vain.

“I tell them upfront, you’re not going to be Jackie Chan. It’s like taking a piano lesson. You’re going to have to practice these techniques and get into a class or otherwise, if you don’t use it, you lose it. Still, it’s a step in the right direction.”

He encourages self-defense students to at least take a refresher course annually so they do not forget.

Rudy Duncan, 10th-degree black belt in karazenpo go shinjutsu and grandmaster and owner of Duncan’s Martial Arts in Syracuse, is also a licensed clinical social worker and trauma specialist. He said that many women feel drawn to self-defense classes because of a past trauma.

“We talk about the three A’s: awareness, assessment and action,” he said. “We talk about what we need to be aware of in our space, assessing it. Action can be a lot of things. Self-defense doesn’t always been something physical. It can mean moving away.”

As with the other schools, Duncan’s self-defense classes emphasize a small assortment of easy-to-perform techniques and strategies that can be broadly applied instead of the broad array of techniques that it can take several years to master.

“If people want some basic skills to have some idea of how to handle themselves, we can do that in a four-hour workshop,” Duncan said. “I invite the people back to work on those skills again. They should do something every year.  It’s like the police department. They do retraining every year.”

He helps students work through how they would feel if attacked so were it to ever happen, they would not freeze and remain passive but take action to stay safe and thwart the threat.

“If they only learn techniques, they think they can do them, but they have to think about the response,” Duncan said. “If not, your body shuts down.”