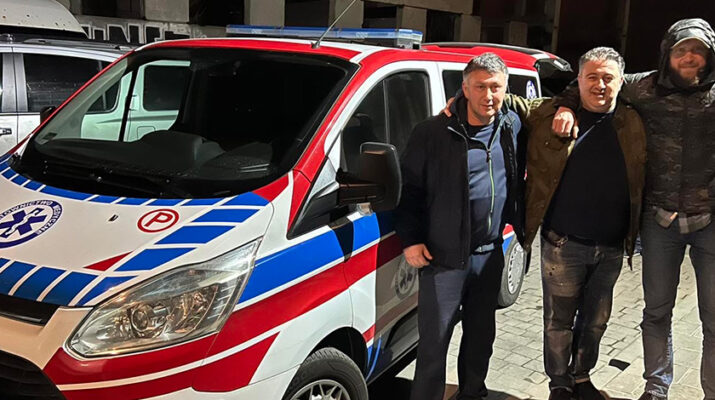 In the past SUNY Upstate urologist Gennady Bratslavsky returned to Ukraine to visit friends, family or lecture at medical events — now he’s assisting victims of war — he plans a second trip in June

The Hippocratic Oath is said to compel doctors to “first, do no harm.”

Urologist Gennady Bratslavsky of Upstate Medical University does good. “Give Back” is his motto, the doctor said, adding that it is also his initials.

Bratslavsky, 48, is not only a surgeon and chairman of Upstate’s urology department—he’s also a humanitarian, bringing much-needed supplies to his war-torn homeland.

“I used my own time, my vacation time,” he said of his sojourn into Eastern Europe. He visited Poland and Ukraine in April to deliver supplies and has gone back with more.

“I have many memories—many friends growing up, a lot of sports and of course a lot of school work. Not much different from any child from Oswego,” he said.

“Things have changed. I’ve returned to Kiev and Ukraine numerous times over the years since I immigrated to the U.S. I go to visit my family that I still have, or friends, or giving lectures at numerous international conferences held in Ukraine,” he continued. “I made sure to, every time I return, visit the neighbors in apartment buildings where we lived. I have even brought my own children before and showed them the apartments where we lived so they can actually appreciate their house in Fayetteville.”

“They have taken a walk with me from my entrance at the apartment all the way to my school, as we did not do school buses and just had to walk through neighborhoods in shine and rain, or rain and shine, whatever is the right English saying,” he laughed.

Growing up in the Soviet era, there was much propaganda and anti-Semitism.

“The humans are built in such a way that they tend to remember the sweetest, kindest, warmest moments and this probably is the basis for such a visceral or such a sincere emotional reaction that all of us are experiencing now,” Bratslavsky said. “But hearing that there are shots fired in the neighborhood where you lived just gives you a sense of despair, sadness, anger and a desire to do everything possible that you can to help people of Ukraine.”

Bratslavsky has, with the aid of family and friends, been helping in phases.

“The first one was an immediate financial assistance where we just literally wired our own money to hospitals or for first responders,” he said. “The second phase was collection of medical supplies here in Central New York with Auburn [Community Hospital] to be the first one to make a donation of medication and supplies. Followed by Crouse Hospital, Upstate, Cayuga [Medical Center] and Mohawk Valley [Health System].”

They collectively donated a truckload of medications and supplies, Bratslavsky said.

“I literally drove my SUV to each of these hospitals to pick up donations. And then, eventually, had to rent a U-Haul truck and drove to Albany where halfway I met my friend and the co-founder of the website Help Free Ukraine (http://helpfreeukraine.com), Alex Golubenko,” he said.

Golubenko is a childhood friend from Ukraine, Bratslavsky said. He now lives in New York City.

“He drove a rental car up from New York and we just exchanged in Albany. He ended up driving the truck back to New York and me returning to Syracuse,” he said. “The supplies left and went to Ukraine.”

The third part was his April trip. 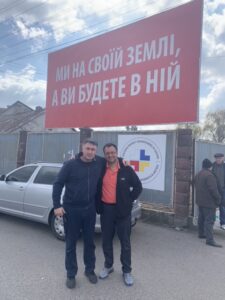 “I had to drive [an ambulance] for 20 hours, Warsaw to Lviv, western Ukraine— a place that was bombed just 12 hours before my arrival,” he said.

“I was afraid,” he said. “And my wife, Katya, and my younger two boys did not know about this trip. The only person who knew was my friend as well as my oldest son who is now 18 and needed to be told, just in case.”

Bratslavsky said it was “an unpleasant feeling driving into a city that was just recently bombed and then staying there in a hotel that had beautiful large windows, in the middle of the city. Obviously, it gave me quite a feeling of anxiety. People in hospitals were depending on me I had to help. I didn’t think I had much of a choice.’’
“I had difficulty sleeping, yes. You could hear air raid sirens; I didn’t know if something was going to strike the hotel,” he added. “It was something that needed to be done.”

He said no one shot at him during his humanitarian effort.

“My childhood friends are those guys who are now dispatched to the eastern Ukraine in the hottest area,” he said.

“That included more than 300 pallets of medication that were brought to Kyiv,” he said. “It was very challenging logistics.”

The fourth phase, there are ongoing three projects now. They were working on another large donation from a pharmaceutical company that was expected to be in a warehouse in New Jersey on May 20. Bratslavsky said he would spend the entire weekend in New Jersey with many volunteers sorting through 150 pallets for medications that were scheduled to depart from Newark to Warsaw on May 27. (It cost about $300,000 for a cargo plane to transport the load).

Bratslavsky said he has stayed in touch with more than 100 hospitals in Ukraine regarding “this major delivery.”

“Where do I find the time? You just cut back in your sleep,” he said matter-of-factly. “And you spend all weekends and nights doing this. Yesterday I operated. Today I operated. But when you’re not operating or seeing patients, this is what you do. I am headed back to Poland with my middle son. He is interested in doing medicine. We are headed out there on June 4 for a few days as we will be purchasing more ambulances and bring in more medical supplies.”

Ambulances take a big chunk from the donations. “But thanks to the generosity of numerous donors and my wife’s clients, we are getting things done,” he said.

Katya, an artist, is supporting the cause by selling her paintings and donating all the proceeds to the Ukrainian medical relief effort. She has now sold close to a quarter million dollars of her works.

“We have also gotten donations from friends and family—from patients. My wife has been working tirelessly making beautiful art, shipping it all over the United States and even overseas; just trying to support the cause,” he said.

The goal is to keep a minimal balance in the account because the money that they raise is money that is not supposed to sit in a bank account. “It must be spent, put to use for the poor people, the suffering people of Ukraine,” Bratslavsky said.

‘I proudly tell people that I am Ukrainian’

Back in Ukraine, Jewish people were not considered Ukrainians when he was growing up in Soviet times, he recalled — “even though I had the same passport as everybody else,” he added. “In modern Ukraine this no longer is present. Even though for 30 years I used to say I am a Jew from Ukraine, now since the war has started, I proudly tell people that I am Ukrainian.” (Ukrainian President Volodymyr Zelensky is Jewish.)

“It’s been the longest 85 days of my life,” Bratslavsky said during an interview on May 19. “It has been disheartening, devastating, exhausting and there has not been a good night’s sleep for any of us since the war started. You’re checking news continuously. You check on your friends and family continuously. You get continuous requests from hospitals and friends.  Somehow we are managing to satisfy all these requests and just make things happen.”

Is there a light at the end of the tunnel?

“I am afraid that this is going to be, unfortunately, a longer war than any of us hope for,” he said.

Bratslavsky refers to the Russian president as “a creature” who should be removed from power.

“As cleaning the Ukrainian land of the aggressors will unfortunately take much effort—many lives will be lost,” he said.