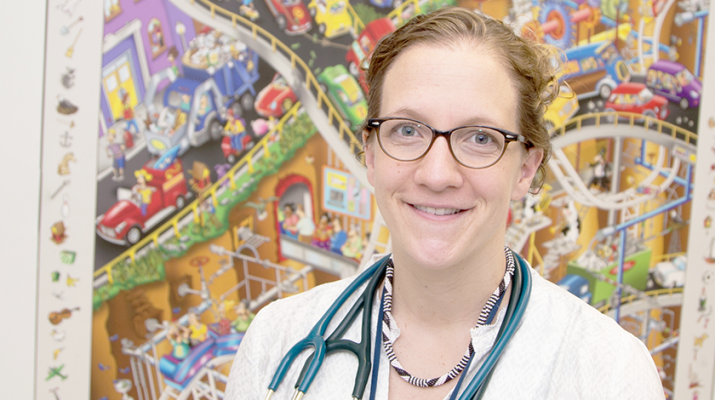 The many refugee children who are welcomed to Syracuse each year have come a long way to find safety, but many of them have brought health issues with them. The Upstate pediatric refugee clinic exists to see that they have the healthiest start possible in their new country.

It’s called UPAC — the Upstate Pediatric and Adolescent Clinic and its health providers take in 24 new patients every month or close to 300 a year, according to physician Andrea Shaw, the clinic’s director.

“Even though we call it a clinic, it’s nested within Upstate’s outpatient pediatric practice which is really nice because myself and another nurse practitioner handle all the new patients that come in,” said Shaw.

Refugee children are referred to the clinic by their relocation organizations. They are seen over the space of two years. It’s a long-term commitment by Upstate Medical University, not just one quick examination. Providers want to make sure the children are adjusting well and healthy in their new home.

“We get to see them frequently over the first couple of years that we are here, iron out any medical problems that they had come with or problems that arise in their initial period of resettlement,” Shaw said.

Initially the children’s medical care is covered by New York state — the first two visits. Then Medicaid usually kicks in for the families. After the two-year initial clinic period, the children are transitioned to Upstate’s regular pediatric services.

The clinic watches for any tropical diseases that the children might have or any chronic ailments they already have. They are screened before coming into the country for dangerous contagions, but there are more common illnesses they may encounter.

“It’s everything from primary care issues that anyone might deal with — chronic health needs that they may have carried their whole life, but then also tropical diseases depending on where they come from, and different exposures they may have had based on where they had to travel before they came to the United States,” Shaw said. “The two biggest questions we always want to know is where they’re from and where they’ve been.”

The kids often have to deal with the trauma of whatever they’ve had to escape in their homeland, the stress of constantly moving, and the challenge of coping with a new culture.

“All of those have different layers of stress that the kids feel,” Shaw said. “We’re able to see them through a lot of that transition.” Shaw keeps a lookout for signs of psychiatric trauma. Coming from a war-torn nation can leave kids with scars that are not just physical, not to mention the stress of constantly relocating to new areas of the world. The children get the help they need, though at this point Upstate itself doesn’t have psychiatric counselors on staff. Shaw is hoping to change that.

“That is one area that I’m looking to enhance further,” she said.

The presence of a refugee clinic at Upstate is beneficial to the providers too. Many of them have an interest in the healthcare of people from around the world, not just here.

“This is a niche where many of us with an interest in global health find that this is a global health practice in our own back yard, because we’re taking care of patients from all over the world with the same conditions that they would have in their home countries,” Shaw said.

There are peculiar challenges to this care. These children are coming in from around the world. They don’t often know English and the providers don’t know their language.

“I think communication is the biggest crux,” Shaw said. “We spend a lot of our time communicating, a lot less of our time focused on some of the nitty-gritty medical words. You learn how to work with translators to really connect with patients and find the way to get the message across.”

There is a great demand for the clinic in Syracuse and Upstate is working to meet it. Shaw said 1,400 refugees relocated to Syracuse in 2016, and over 50 percent were children. These young outcasts of the world can finally find a place to call home in Syracuse, and Shaw and her clinic are happy to help them do it.

“On the whole, these families are incredible,” she said. “These kids are clearly survivors and they’re adaptable or they wouldn’t have made it as far as they did.”