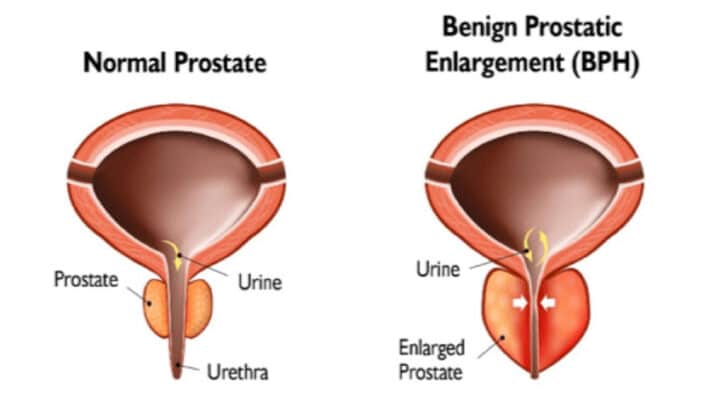 Benign prostatic hyperplasia (BPH) — which is also called prostate gland enlargement — is a common condition among aging men, in which the prostate enlarges and can cause obstruction of the urinary stream (Figure 1). It commonly affects the quality of life in approximately one-third of men older than 50 years, and it is one of the top 10 diseases of men above 50. As many as 14 million men in the United States have symptoms of BPH.

The severity of symptoms in men with BPH varies, but symptoms tend to worsen over time gradually.

Aside from causing obstruction and impairment of the urinary stream, BPH can cause irreversible damage to the bladder and hamper its ability to contract and empty. With time, if left untreated and with no dis-obstruction, bladder damage may become irreversible and result in urinary tract infections, kidney problems, and more.

There are a plethora of management strategies for PBH, including surgical and minimally invasive treatment options. These include pharmacological treatment, resection, vaporization, and enucleation of obstructing prostatic tissue. The surgical treatments can be administered using various modalities.

Out of the 14 million US men with known BPH, approximately 64% are treated with medications, 34% with observation, and only 2-3% undergo some surgical treatment.

The gold standard surgical treatment option is the transurethral resection of the prostate (TURP), an endoscopic minimally invasive technique, with no external incisions that enable the surgeon to resect, evaporate or enucleate the obstructing prostate tissue and create an open clear channel.

Although the success rates of TURP are quite high, one of its main adverse effects is retrograde ejaculation (dry orgasm) that can occur in as many as 90% of cases. Retrograde ejaculation occurs when semen enters the bladder instead of emerging through the penis during orgasm. Patients would be able to reach sexual climax but might ejaculate very little or no semen. Although it is not harmful, it can potentially cause male infertility. It is caused by damage to the nerves or muscles surrounding the bladder neck (Figure 2). Additionally, up to 10% of men who undergo a TURP can experience a temporary or permanent difficulty in achieving and maintaining an erection (erectile dysfunction) afterward.

Aside from the numerous surgical modalities being offered by many centers across the nation, including minimally invasive techniques utilizing advanced laser systems, a relatively novel minimally invasive modality, the prostatic urethral lift (Urolift) is also an established treatment option.

The Urolift represents a minimally invasive approach, which can be done under local or general anesthesia. In this procedure, obstructing lateral prostate lobes are compressed by small permanent suture-based implants delivered under endoscopic guidance (Urolift), opening the prostatic urethra and leaving a continuous anterior channel allowing a good urinary stream (Figure 3).

Randomized studies have assessed the benefit of the Urolift procedure, demonstrating significant efficacy in all standard parameters. Although not as effective as TURP, its superior procedural simplicity, ability to be done under local anesthesia, not requiring tissue removal, short duration (10-20 minutes), and essentially lack of consequent retrograde ejaculation and erectile dysfunction as an adverse effect, make it a very attractive minimally invasive approach.

This procedure is offered throughout Central New York by the Upstate Urology doctors at various offices including Syracuse, Courtland, Binghamton, Utica, and more.

Ultimately, the choice of surgical modality depends on several factors, including prostate size, patient comorbidities, patient preferences, willingness to accept specific side-effects, availability of the surgical armamentarium, and experience of the surgeon with these surgical techniques.

Regardless of the treatment option that is finally chosen, men above the age of 50 with urinary symptoms should be examined and assessed by a urologist. `