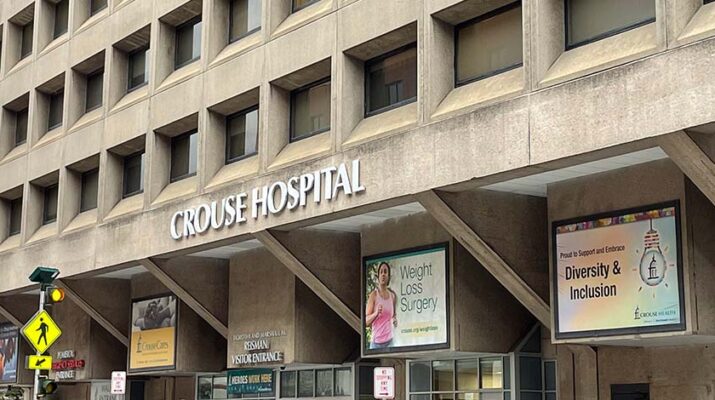 Upstate Medical University in April announced plans to acquire Crouse Health. If it goes through, the combined systems will have 13,000 employees, 1,200 licensed inpatient hospital beds and offer more than 70 specialties. But is the move good for patients?

Crouse, a nonprofit, will merge into Upstate’s health system and be renamed Upstate Crouse Hospital.

The proposal must be approved by the state, which may take quite a long time.

“This is an acquisition. Crouse will become part of University Hospital,” said health care expert Thomas Dennison, professor emeritus at the Syracuse University’s Maxwell School. “The bottom line is the two will come together. It’s not so much a cost-savings; it’s a cohesive plan for the future, a cohesion of services where they can be more optimal. It’s silly to have everything so spread out all over the place.”

“It is indeed a trend, nationally and statewide. Just look around at other metropolitan areas. Utica had four hospitals; now has one.

Rochester, I can’t even count, had so many hospitals. Now it’s essentially down to two systems. Buffalo had several as well. So it is very, very much a trend,” said Dennison.

Crouse and Upstate have a very interesting history; they’re physically attached by a bridge, Dennison said. Many Upstate doctors also practice at Crouse.

“The OBs do all their deliveries at Crouse because Upstate University Hospital doesn’t have an obstetrics department,” he said. “Crouse delivers more babies annually than any other hospital in this region.”
“A lot of the residents who are now Upstate University doctors did a lot of their clinical work at Crouse. So, they have been very much linked; day to day, operationally, clinically—but not always on the leadership level,” he added.

There have been talks of merging the two hospitals for decades, according to Dennison. 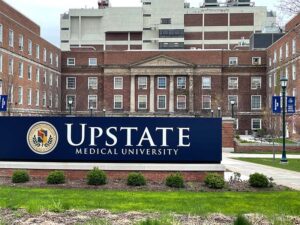 “One reason Crouse physicians said they’d never do anything with Upstate—even though most of them trained at Upstate or a lot of them—they were afraid that they would be required to become part of the academic department and have to give up their private practice. Which isn’t true,” he said.

“How many hospitals can Onondaga County support?” he asked rhetorically—“Is it a four-hospital- town, a two-hospital-town, a three-hospital- town?”

Stand-alone hospitals are becoming a thing of the past, he said, citing Oswego Health in Oswego and Samaritan Medical Center in Watertown for example.

We don’t use hospitals the same way that we did 25 or 30 years ago, Dennison pointed out.

“In 1980 you expected every physician on staff would generate around 100 admissions a year. That would be the normal number of admissions. So they would be running a couple patients a day. The length of stay was 10 to 12 days,” he said. “A family doctor now, practicing in his or her office, may not have a patient admitted for a while because they are managing this patient on an outpatient basis; and when the patient needs to be hospitalized, they are typically quite sick and really do need the services of a specialist or subspecialist.”

So a family practice doctor who is routinely working in the office may not admit a patient as often now and most have given up their hospital privileges. They don’t need the hospital, they don’t use the hospital. Their surgeries are done in an outpatient setting, he added.

“The role of the hospital has changed so much in recent years. So, we don’t need as many hospitals as we use to.”

“Upstate really has their act together. They’ve become, of the three remaining hospitals, I think the preeminent one,” said George Chapman, a health-related consultant based in Syracuse. He writes the column “Healthcare in a Minute” for In Good Health — CNY’s Healthcare Newspaper.

“There are a lot of reasons hospitals are merging,” Chapman continued. “Number one is ‘let’s stop competing with each other for doctors.’ They were trying to rob each other’s staffs. They had some defections. Guys would leave Upstate and go to Crouse or they’d leave Crouse and go to Upstate. It got to be like a bidding war, if you will. That competition isn’t any good for the community.”

So now, they’re saying, ‘Let’s do this for the community. If we combine together that makes a lot of sense,’ Chapman explained.

“Another reason to combine medical staffs is younger doctors want a quality of life, they don’t want a lot of ‘call.’ So if you are an up and coming OB-GYN your first question is ‘how often am I on call?’” he said.

“By merging, [hospitals] now have 20 OB-GYNs, let’s say. Good, I’m [the doctor] on call like once a month. The larger your department, the less on call you are,” he said.

Chapman thinks for recruiting, when you are looking for physicians — [doctors] are looking for a big system now. The larger systems are very attractive to physicians now. “They have larger departments, that cuts into the doctors’ call responsibilities. So they can have a life; work 8 to 5 and not kill themselves. It’s healthy for doctors to have a life outside medicine.”

The other obvious reason to merge is purchasing and supplies, Chapman added.

“Hospital mergers are critical if hospitals are to reduce things like operating costs. [Upstate and Crouse] will have tremendous purchasing power now with their budget and they will save hundreds of thousands if not millions on things like health insurance and supplies,” he said.

“One of the big issues they are going to have is electronic medical records. They are on different systems right now,” Chapman said.

“That could be a challenge, let’s put it that way. That will be interesting to see what they are going to do with that.”

A lot of choices

“I always look at it as ‘bigger is better.’ I think it will be good for consumers. If they are able to have enough beds and enough doctors they will have a complete network so when they go to market themselves, as the Upstate Network, if you will, they’ll have a complete roster of physicians to become a large health system. People will have a lot of choices,” Chapman said.

“Hospitals ‘prices’ [or charges], which admittedly are absurdly high, only come into play for the 10% of consumers without insurance,” he continued. “The argument that hospital mergers ‘drive up prices and harm consumers’ is terribly misleading.”