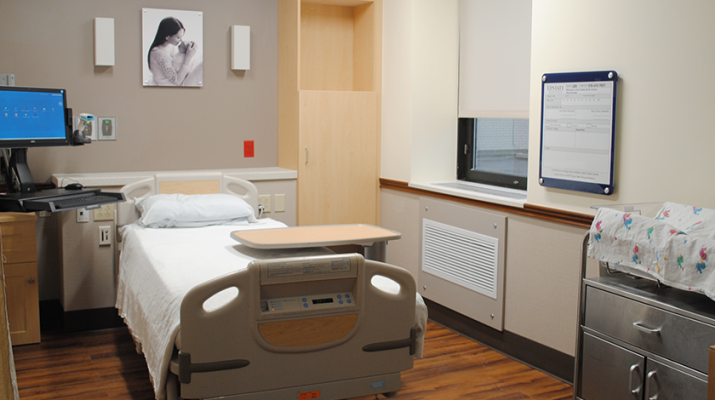 With the new year comes new changes at the Upstate University Hospital at the Community Campus.

In January, its Upstate Family Birth Center will be fully open and accommodating mothers and their babies throughout the 21-bed unit.  Begun in 2016, the $9.2 million construction project was done in two stages, allowing the hospital to keep caring for mothers and babies during this project.   The first part was done in the fall of 2017, with the phase two wrapping up in December.

Labor and delivery will still occur at its current location on the second floor, but the renovated 29,000-square-foot unit for post-partum care, is referred to as the Family Birth Center.

And that title – Family Birth Center – underscores the family-oriented theme in planning for all the amenities.  Barbara Bennett, RN, and nurse manager for the new area, pointed out some of the features during a recent tour of the facility.

“It was a long-time coming,” she said, emphasizing that the approach was to make the new rooms more “hotel-like” versus clinical.

According to a statement from University Hospital, the original post-partum floor had not been renovated or updated since long before Upstate acquired Community General Hospital in 2011, which it was eager to give the birth center a modern upgrade.

Called couplet rooms, they are private spaces for the mom and newborn and family.  They are furnished with a bed for mom and a bassinet nearby for the baby, a computer;  a flat screen TV; a glider; a sofa that pulls out to a full-size bed; a charging station;  and even a specially contoured sink for bathing the baby.   Each room has a large bathroom, including a walk-in shower.  This compares to the old rooms, which were semi-private, had one bathroom without a shower and limited closet space.

Currently, there’s a lot of national focus on a “baby-friendly” initiative, which fosters breast-feeding, Bennett said.

“To promote that as a hospital, we have a lactation office, so the lactation consultants can do one-on-one training with moms,” she explained.

The renovated space also has two nurses stations; a six-station nursery;  and a family lounge, with a fireplace and a kitchenette where families can prepare meals of their own.

This birthing center is considered a Level 1, so it’s prepared for low-risk pregnancies.  St. Joseph’s Health Care Center and Crouse Hospital are rated Level 3 and 4, respectively, and can handle deliveries and post-partum care that might be higher-risk.  Nonetheless, the new Family Birth Center at Upstate-Community has a six-station nursery to tend to those newborns that might be mildly sick, with new monitors and space to accommodate mothers.

The upgrades have also enhanced the working environment for the staff, Bennett pointed out, especially with the new level of technology that has come about.

In 2018, the hospital saw 1,056 deliveries, which is an increase for them, Bennett said.  This also included 10 sets of multiple births.