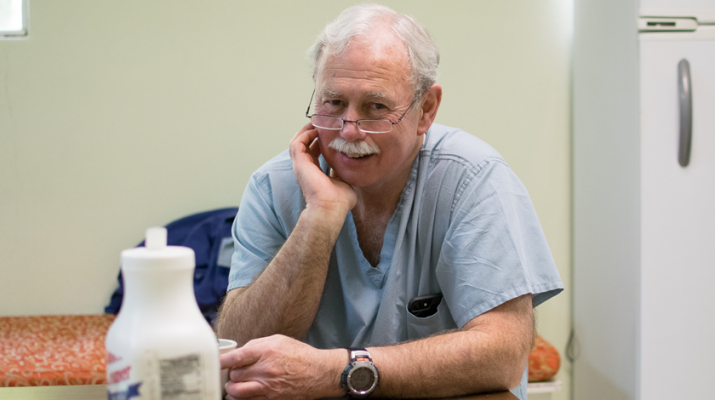 Orthopedic surgeon Thomas Haher and several of his colleagues travel to the Dominican Republic annually, but not for the purpose of escaping frigid Central New York winters or to relax on a beach. The trips are for work.

No one is paying for the medical services they render, and they spend their own money for airfare, food and lodging. And yet, they always come home feeling happy and invigorated, declaring to customs that the reason for the visit was both business and pleasure.

“You can’t beat the feeling you get when you see that you’ve helped someone that so desperately needed it. To see kids walking straight again, that’s the greatest thrill,” said Haher, a Syracuse-based orthopedic surgeon who leads the Uno A La Vez (meaning “one at a time”) initiative to provide orthopedic services in the Dominican Republic.

The program began in 2014, replacing a similar program Haher led in Honduras for 20 years. While Haher enjoyed the progress that his team made in the tiny Central American country, aspirations to help an impoverished Caribbean nation remained with him. The Dominican Republic is widely viewed as a vacation destination, though it is a country with a tremendous wealth gap.

Residents in the mountainous areas lack transportation to get to the clinics in the cities. The government provides some basic health services for its citizens, but sophisticated surgeries or implants aren’t covered. Road accidents, which often include pedestrians being hit by vehicles, are the third leading cause of death in the Dominican Republic. Motor scooter collisions that leave victims with life-long injuries are fairly common.

“They can’t get an operation on their arms or legs,” Haher said. “With most of the jobs in agriculture, if you have a crooked arm or leg and can’t do the work, then you are doomed to a life of poverty.”

The team, led by Haher and longtime friend and colleague Brian Bauer, an orthopedic surgeon from New Jersey, includes nurses, surgical technicians, an anesthesiologist and various others. They hail from different practices and hospitals in the Central New York region.

“As soon as you get to the airport,” said Amanda Ciarlei, a nurse on the team and the media director for Uno A La Vez, “it’s just a group of people who have the same willingness to help. The idea of competition and everything else goes out the window. You come home with a different perspective.”

During their most recent short trip, in February, they performed nine surgeries. A local Jesuit organization coordinated the transportation, providing round trip service to some families that live two hours or more away from the clinic. That organization also assures that the patients have access to necessary follow-up care after the American volunteers leave.

The clinic was located outside of Santiago. The facility was built by the Institute for Latin American Concern (ILAC). The volunteers stayed on a campus there where lodging and meals were provided for $40 per day. ILAC is an entity of Creighton University in Omaha, Neb. In keeping with Creighton’s Catholic Ignatian values, the ILAC facility provides services in the area of health care, education, agriculture and spirituality to poor, rural residents of the Dominican Republic.

On the way to the ILAC campus from the airport in Santiago, team members observed that almost every building they passed was in need of repair. Vegetation was overgrown on almost every property, and there was garbage on the side of the roads. Still, the scenery of the island in its simplicity was breathtaking. The crew had to wait for a cow, leisurely taking its time on a beautiful sunny day, to pass before they could enter the ILAC campus, Ciarlei said.

The Syracuse team utilized two operating rooms on the campus. Despite the age of the equipment, everything was maintained and in perfect working order, Ciarlei said.

Most of the surgeries performed were to fix limbs that had not healed correctly. Normally, patients are expected to purchase their own implants to repair any fracture. The cost of the equipment like screws, plates or rods to repair fractures, costs about 2,000 percent of the monthly income of the average Dominican citizen.

All told, the volunteers pay about $1,000 each for airfare, food and lodging and other expenses. Some of the doctors have donated additional money to the program, though much of the equipment is donated. Many of the plates and rods that were used in the surgeries to help limbs heal were considered expired by U.S. medical standards even though they were in perfectly acceptable condition.

Haher, a New York City native who fell in love with Central New York after he began his medical career here, plans to continue the Dominican Republic initiative on an annual basis. Young doctors and medical professionals in the area have expressed an interest in future trips, so the organizer is hopeful that this project will continue long after he retires.

Ciarlei is planning fundraisers to help with the costs of future trips, including a wine-tasting event. Uno A La Vez members have their sights set on performing up to 20 surgeries a year in future trips.

“It’s been a very rewarding experience so far,” she said. “Without the support and donations of our local community, we wouldn’t have been able to perform as many (surgeries) as we did.”

For more information about the program, including donation opportunities, visit www.whatsyourchange.org