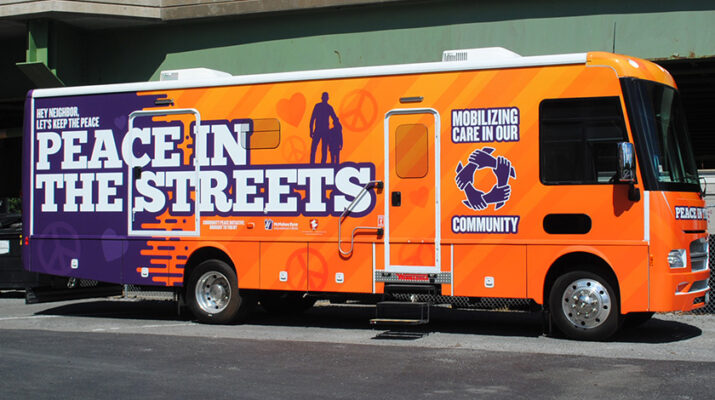 The McMahon Ryan Child Advocacy Center is ramping up its counseling efforts, especially in terms of helping youth impacted by gun violence, with its new mobile unit.

The center has long served Onondaga County, and its counselors see between 1,400 to 1,500 children every year who have been victims of child abuse, according to Colleen Merced, executive director of the center. That number jumps to 3,500, if one includes secondary victims — parents, guardians or siblings that come in with them — since they too can be affected by the trauma that the children experience, she added.

This new 33-foot long Winnebago allows the center to provide services to those who might not be able to get to the center on East Genesee Street.

“We want to be able to go into the community,” she said. “There’s such a lack of services when it comes to mental health. We provide outreach education in the schools. We’d like to provide more in the community.”

Those staffing the unit will be specially focused on those young people impacted by gun violence.

Merced said the center realized it had to better reach youth that have been affected by gun violence.

“They’re traumatized. We wanted to be able to recognize that and be able to work with that population as well,” she explained.

Statistics from the Syracuse Police Department underscore the need for such services. Locally, from January through June 1 of this year, there have been 10 juvenile victims of gun violence in the city of Syracuse. This compares to 19 in 2021. If this pace continues, the city could exceed that number this year.

Syracuse Deputy Police Chief Richard Trudell sees three different populations of youth who are negatively impacted by the gun violence in the city — the suspects arrested, the direct victims and the youth that are indirect victims.

“In my mind, the largest population, are the juveniles that are the indirect victims of gun violence who have strong connections to friends or family members that have been shot or arrested for gun violence,” Trudell said. “The school friend of the 13-year-old who is shot or the son or daughter of the adult homicide or shooting victim. This population is subject to significant trauma and is in need of attention from the community and programs.”

To better reach those young people, the center has tapped a key resource, Timothy Jennings-Bey, the CEO of the Street Addiction Institute Inc., and one of the founders of the trauma response team, established about 12 years ago. The TRT responds to gang-related neighborhood homicides in Syracuse and its members are dispatched to the scene to assist with any crowds that might gather, help at local hospital’s emergency rooms and provide support to the families. Because many of the members of the TRT have grown up in some of the areas in the city that sees the most turmoil and because they are familiar with the residents, they will have often have a better connection.

Over the years, Jennings-Bey has been able to create a “relationship when it comes to gun violence between gangs in different neighborhoods. He has the expertise and the knowledge,” Merced said.

And, he will certainly bring that expertise and perspective to this new initiative.

“We have to do something about these young people being exposed to this level of violence. In that dynamic, it can change the trajectory of your family for at least three generations. The mobile unit gives us the opportunity to put more boots on the ground to promote healthy lifestyles,” Jennings-Bey said.

If an incident occurs in a neighborhood, the mobile unit can get to the location, and staff can have, what Jennings-Bey called, “that real-time conversation on the ground. I think that’s what’s missing. I think we sell our citizens short by not giving them the opportunity to articulate the experience that they live day in and day out.”

Often people cannot fully comprehend the pain these young people are in.

“We don’t realize all the trauma that they’ve endured and how it affects their school day,” Merced said.

The center staff would like to be able to offer services to the youth, but also help prepare school personnel as to the behaviors they might be seeing among their students and why they’re seeing them.

They want to be able to not only offer these youth services throughout the day, but also provide school personnel with some insights as to what behaviors they might see students exhibit and why.

Initially, the van will be staffed with two counselors, but the long-term goal is to have a group of counselors on a rotating basis to provide services. Merced emphasized that the van is not where kids can come and say what they’ve seen, but for providing services to the community.

The $250,000 van was made possible due to a grant through the U.S. Department of Justice and the New York State Office of Children and Family Services. Merced said that 15 similar units were awarded to communities across the country about the same time the McMahon Ryan Center received its vehicle.

“The McMahon Ryan Child Advocacy Center has long provided crucial services and education for our community and for our children. With the mental health fallout from the pandemic and record-breaking gun violence, these services are needed now more than ever,” said Syracuse Mayor Ben Walsh. “I thank the McMahon Ryan team for its deep commitment to providing relief to those experiencing trauma as a result of this nationwide crisis.”