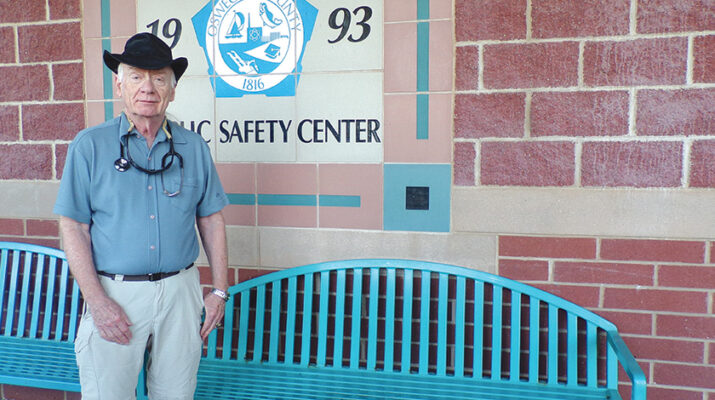 Physician Michael Nupuf retired in May from his position as the medical director for the Oswego County Correctional Facility. But he found a more than capable successor —Corliss Varnum.

A family medicine specialist in Oswego, Varnum has more than 39 years of experience in the medical field.

“One day, he called the office and talked to my partner, [physician Matt Liepke}, and he said something about whether he’d be interested in doing a little something at the jail. He said, ‘No, but Dr. Varnum may be coming into some extra time.’ He was talking about my retirement, which wasn’t formerly announced yet,” Varnum recalled.

Varnum said he was under the impression that he would be filling in from time to time so his friend could get some time off.

“So, I said ‘OK’ and went in and talked with the staff,” he said. “This way I could keep my hand in the stew of medicine in a different kind of medicine.”

“These [inmates] have a whole different set of problems — medical needs and all that,” he added. “I was primary care, family practitioner from newborn all the way right up.”

It’d be a nice augmentation, Varnum thought. “I’m retiring … thinking about keeping myself current,” he added.

“Every community needs help. So I met with the sheriff and undersheriff and then I realized that [Nupuf] is stepping down. And, it’s all going to be me — but hopefully keeping it part-time,” Varnum said.

“The staff is very knowledgeable and dedicated. So I went along with it and I’ve been there since,” he said. “I did it back when I first came to town — back in ’86 — for a short while, at the old jail.  It was the same kind of thing. You had a room for examinations and the inmates’ biggest complaints were whether they could get an extra mattress at the time.”

The staff works up a schedule of people that need to be seen — it could be a follow-up of something the doctor did before for them. They line them up. They could have a complaint, they could have any number of things, could be diabetic or whatever, Varnum explained.

“Do they need to continue their medication? Depends on how long they are going to be there — that depends on what they did, I guess,” he said. “Some are inmates headed for federal prison but haven’t gone there yet, obviously in for the long-haul.”

“It’s a half day a week. That’s the way Mike did it and it’s stayed that way. I don’t want it to be an eight-hour a day kind of thing, five days a week. I’m retiring, too.”

There are nurses and an EMT person there as well. Nurses call with a concern about an issue or a medication and the doctor takes the call.

“And then, you know, the corrections officers are there, right around the corner,” Varnum said.

So far, everything has been OK. No really outlandish aggression problems or anything like that, he added.

“Enjoying? Yeah, I am. You know, it’s still medicine — different concerns, different problems. A lot of them, you know, they have drug issues, other issues, probably why they got in jail. Some of them get out, go home and never get back in. Some of them do come back. It’s almost like [at jail] they have a regulated life; they have food and they have shelter over their head,” he said. “I enjoy working with the staff. They’ve been very helpful and patient.”

“It’s sad. You talk to some of these folks, they’re not only taking oral drugs, they’re taking intravenous drugs. I’ve seen evidence of that, track marks as they used to say,” he said. “I’d say, ‘did you get your COVID vaccination?’ and they’d tell me, ‘no I didn’t get that—that could kill me!’

“With injectible drugs, which many of them are doing, you worry about HIV, hepatitis B as well as hepatitis C. All those things are there and then the question is, are they there long enough for us to do anything to help?”

“They go home and you try to set them up with care, but they don’t always follow up. They may not find a doctor who will take their insurance or they don’t have any insurance at all. So that all gets in the way and after a while they don’t get treated,” the physician said. “Some of these guys have been in and out more than once; can’t seem to break the cycle in their life. It’s a tax burden, but inmates are entitled to care, medical care.”

If they need to go to the ER, they have to send a guard with them. That pulls [the guard] away from the facility. They are pulling an officer away and that leaves them with a hole at the facility. All those things play into trying to get inmates medical care. So it’s not as easy as you come in and you see your doctor,” Varnum explained.

So far, he hasn’t had a problem for getting pre-authorization for things like X-rays or CAT scans, he added.

“Sometimes things can get advanced before they get treated. But [the county] is doing everything it can—it just isn’t as smooth as they’d like it to be. They are doing the best they can with what they’ve got,” he said. “Currently, I am the only M.D. there. As far as I know, that’s the way it’s been for ever.”

“It’s a part of our community. This part is kind of invisible, I guess you’d call it. You don’t want anything tragic to happen to anybody in jail,” he continued.

“What would I be doing if not this?” he asked rhetorically.  “I’d be trying to keep up with today’s medicine, keeping up with new developments. That’s certainly kept me more in tune with COVID and all that stuff, new treatments and vaccines.”