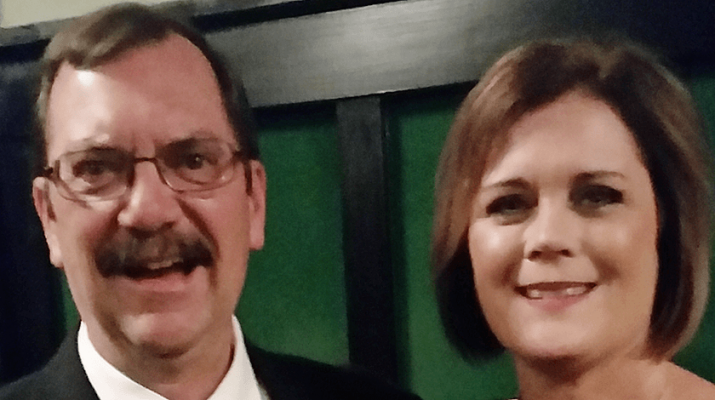 My family thought he had had a stroke. His co-workers thought he was coming to work intoxicated. The first sign that something was wrong was slurred speech.

My husband Randy Jevis of Camillus was 60 years old when he received the devastating diagnosis: bulbar onset ALS — the most acute form of amyotrophic lateral sclerosis (ALS), also known as Lou Gehrig’s Disease.

Jevis’ inability to speak and to swallow resulted in his dependence on a feeding tube for two years. The loss of his ability to use his arms and hands came next — a cruel fate for someone who was a master craftsman; a man who loved to build things, landscape and garden. He died in January at the age of 62.

ALS is a progressive neurodegenerative disease that affects the function of nerves and muscles. The progressive degeneration of the motor neurons in ALS eventually leads to death. Based on U.S. population studies, more than 6,000 people in the U.S. are diagnosed with ALS each year — that’s 15 new cases a day.

ALS usually strikes people between the ages of 40 and 70, and at least 16,000 Americans can have the disease at any given time. For unknown reasons, military veterans are approximately twice as likely to be diagnosed with the disease as the general public.

Randy was someone who was used to being in charge and taking care of others. He was so frustrated and angry that he had to count on others for his care. We watched as he slowly lost his identity.

With the help of his siblings and nurses, our daughters and I were able to take care of his needs and transport him to his 10-day rotations of Radicava infusions.

Those times with his family gave us all the opportunity to express our love and appreciation for one another . . . and to say goodbye.

There is no hope when you are diagnosed with ALS. There is no cure. There are only trials for new medications, and the questionable effectiveness of the medications that are currently available.

The diagnosis is like a punch in the stomach; a feeling of fear and plans unfulfilled.

Randy died just four months before the birth of our first grandchild. He was so proud that he was going to be a grandpa and so devastated that he wouldn’t be here to meet him.

It is now my mission to raise awareness of this horrible, cruel disease; to raise money for research, and to support the Upstate New York ALS Association.

I recently joined more than 500 ALS advocates from across the country at the ALS Advocacy Conference in Washington, D.C. Patients, family members and caregivers converged on the Capitol to ask legislators to reverse the decision to add noninvasive ventilators (NIV) to the Competitive Bidding Program and to plead with lawmakers to shorten the five-month waiting period to receive Medicare services. It was an honor to walk beside those afflicted with ALS — men and women who are doctors, nurses, veterans, postal workers and other brave individuals who found the strength to campaign for a cause that affects their lives and the lives of those around them.

Locally, I volunteer at the local ALS chapter with the hope that my involvement will help others as the chapter helped me and my husband over the past two-and-a-half years.

I encourage community members to attend the annual Lowell Smith Circle of Courage Walk to defeat ALS. Check-in begins at 9:30 a.m. on Saturday, Sept. 14, at Long Branch Park, 3813 Long Branch Road, in Liverpool. The walk will start at 11 a.m.

Anyone can make a positive impact by organizing a team, joining a team, or making a donation. The funds raised at the local level go toward research, advocacy, a loan closet for medical equipment, financial assistance, resources, and practical and emotional guidance.

Liz Krisanda, executive director of the Upstate New York Chapter, said she hopes that the day becomes a day of awareness for the entire community.

“When former SU football and NFL player Tim Green announced in November that he was diagnosed with ALS, it brought increased awareness to the disease both locally and nationally,” says Krisanda. “It is just by chance that Syracuse walk is scheduled on the same day as the Syracuse University-Clemson Football game that is scheduled for 7:30 p.m.

It is my hope that when my grandchildren are adults, they will look back at the advancements made in ALS research with relief and pride. They will know that their grandfather (and the more than 5,000 people diagnosed each year) did not orwill not die in vain.

I hope that their suffering and deaths prompt a concentrated and committed movement toward the cause and a cure. There is strength in numbers. It will take all of us — scientists, researchers, doctors, government officials, advocates, those with a voice, and those behind the scenes, to help eradicate this disease. Because, really, what greater accomplishment is there than making a difference in the world?”

n For more information on amyotrophic lateral sclerosis (ALS), request support services, or how you can help, contact Liz Krisanda at EKrisanda@alsaupstateny.org or call 315-413-0121.

Eileen T. Jevis is a native of Syracuse, having grown up on the city’s south side. She is currently the communications manager at University College (UC) of Syracuse University. In addition to writing speeches, scripts, articles, and press releases, she manages and coordinates several campus events, including UC’s commencement ceremony and honors programs. She resides in Camillus.

The event organized by the local ALS chapter is designed to raise awareness and funds to defeat amyotrophic lateral sclerosis (ALS). Check-in will begin at 9:30 a.m. on Saturday, Sept. 14, at Long Branch Park, 3813 Long Branch Road, in Liverpool. The walk will start at 11 a.m.

Anyone can make a positive impact by organizing a team, joining a team or making a donation. The funds raised at the local level go toward research, advocacy, a loan closet for medical equipment, financial assistance, resources and practical and emotional guidance.

For more information, contact Liz Krisanda at EKrisanda@alsaupstateny.org or call 315-413-0121.

Photo: Randy and Eileen Jevis at their daughter’s wedding in 2016. Photo provided.