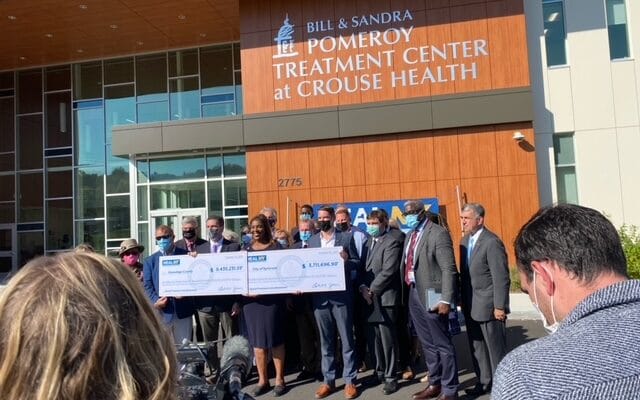 The nearly $1.5 billion being distributed statewide comes from different settlements negotiated by her office following the March 2019 lawsuit against manufacturers and distributors of the painkillers.

James says it’s time to turn the tide on the opioid drug crisis. “Right now in America, someone somewhere is unfortunately misusing a painkiller for the first time. Someone is dying of an overdose.

Somewhere in this state, we are burying a child. Someone is in the throes of drug addiction, and they’re seeking help. We’re living with broken communities and broken families, and people are sinking further into despair.”

Onondaga County is set to receive $9.4 million and Syracuse $3.7 million for prevention, education, treatment, and recovery.

The Attorney General James made her announcement at the recently relocated and expanded $17 million Crouse Health Pomeroy Treatment Center on Erie Boulevard East.

Physician Tolani Ajagbe, Crouse Addiction Treatment Services medical director, says a major issue is access to treatment. But he says it’s improved in recent years where patients don’t have to wait a long time for care.

“A lot of places, including our treatment center, are able to take patients for treatment the same day they show up at our door. So, access to treatment is very important. The damage is already done. We’re just trying to figure out how to stop the bleed.”

Ajagbe said 2020 was the deadliest year for opioid overdoses in Onondaga County, with 156 lives lost. This year is on pace to surpass that number.