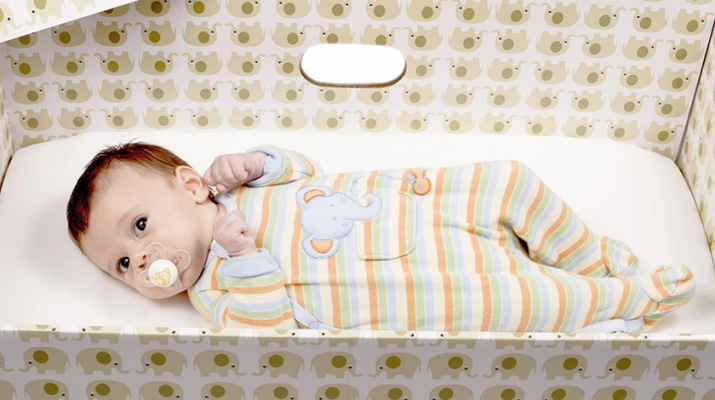 Is a cardboard box better than a crib for newborns?

Parents anticipating the birth of their first child usually shop extensively for the perfect bassinet or crib in the right color to match the nursery.

In Finland, it could be a corrugated cardboard box, not because they necessarily can’t afford a crib. It’s believed boxes are the cause behind the reduction in the nation’s formerly high rate of infant mortality.

Could a box instead of a crib make a difference?

In the 1930s, Finland introduced the program in which income qualifying parents received a box containing baby essentials. Pre-natal care was required to obtain the box. Eventually, the income requirement was dropped and the program continues to this day.

The rates of infant mortality dropped, coinciding with the program; however, there’s no magic in sleeping in a box.

Once at home, co-sleeping in the same bed was commonplace in the 1930s when Finland’s rate of infant deaths was high. This was especially true for families struggling financially. While providing any option safer than co-sleeping is likely to decrease mortality rates, other factors helped drop infant mortality rates.

“Finland has nearly free health care and one of the lowest poverty rates in the world,” said Elizabeth Sapio, pediatric injury prevention coordinator and Safe Kids coordinator at Upstate Golisano Children’s Hospital. “It’s the best place to be a parent. They support new parents with boxes filled with new items. Parents have extended time off, too.”

A host of life-saving vaccines, increased prevalence of breastfeeding, and improved maternal nutrition, and education have all helped decrease mortality rates since the 1930s.

Sapio also said that a safe sleeping environment and safe sleep practices are vital for infant health and that these have influenced lower infant mortality rates.

Laying babies on their backs to sleep has demonstrated a 50 percent reduction in SIDS (sudden infant death syndrome) since introduced 30 years ago. This indicated that a baby’s sleep position has something to do with SIDS. Babies lack the strength to easily move their heads from obstructions, one factor related to SIDS. Overheating may represent another factor.

“It slows down their respiration rate and babies don’t have the same circulatory system like we do,” Charlamb said. “They need just one more layer than we do, like a bodysuit and a sleep sack, but no blanket.”

Pacifiers, white noise, and sleeping in the same room but not the same bed may also decrease risk.

“As long as it’s an empty space, firm mattress and fitted sheet, it can be a safe sleep space,” Sapio said.

The crib itself should either be purchased new from a store (and thus up to current safety standards) or carefully examined for adherence to safety standards, including non-lead-based paint, fixed sides, the proper distance between rails and other considerations. The mattress should not gap from the bed’s sides.

“If you put the box on the floor, a toddler could knock something onto it,” Shimer said. “I wouldn’t want my dog jumping into the space. How can you really sanitize something that’s made out of cardboard? We wouldn’t use that in a hospital setting for infection control.”

There’s also the chance that the baby would face the solid side of the box and inhale less oxygen than optimal.

If a family delivering at St. Joseph’s lacks a crib and the ability to purchase one, the hospital would give them a portable crib such as the Graco Pack ‘n Play, according to Gael Gilbert, a registered nurse and service line administrator for Women and Children’s Services at St. Joseph’s Health.

“The baby can sleep there, it can be used as playpen and it can be used when the baby gets older,” she said. “We had looked at the box on another committee I was part of. There were concerns as to how it would be used. We made the decision to give a Pack ‘n Play.”

Cassie Mazza, registered nurse and clinical coordinator for the NICU at St. Joseph’s Health, pointed out that parents may also set the box down on a high surface and allow it to fall off when it’s unattended.

She added that the crib “should have “no rolls under their head or sleep positioning device, stuffed animals or crib bumpers.”

The American Academy of Pediatrics promotes the ABC acronym to explain how babies should sleep:

• A: alone, not in bed with a parent or caregiver, but in the same room.

• B: on their backs, not facing down. Sleeping on the stomach can close off their airway.

• C: in a safety-approved crib containing nothing but a firm mattress and fitted sheet. Avoid placing crib bumpers, stuffed animals, sleep positioning devices, pillows, blankets or anything else in the crib.

Additionally, parents should keep the room smoke-free, a comfortable temperature and use a sleep sack style pajama to keep the baby warm, not blankets.